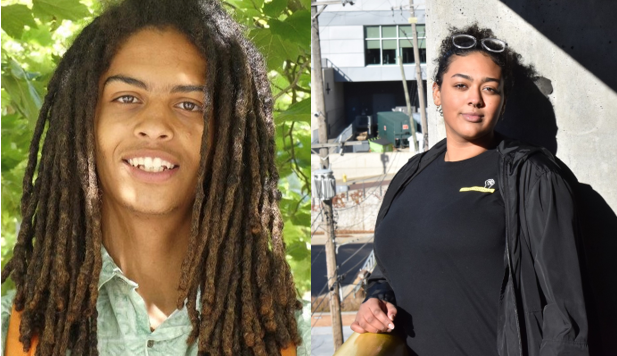 Gideon Kortenhoven and Deidre Mitchell were among 72 recipients nationwide to receive the Cooke Undergraduate Transfer Scholarship, which provides up to $40,000 annually for up to three years, comprehensive advising, and the chance to connect with fellow Cooke Scholars.

The foundation selected 406 semifinalists in March from the more than 1,500 applications representing 398 community colleges. Michigan had 15 students reach this level -- six of them from GRCC.

Kortenhoven, who went high school in Palo Alto, Calif., received his associate degree in French studies on May 1. While at GRCC, he participated in the University of Michigan’s Undergraduate Research Opportunity Program, presenting research on Black families after the Civil War.

“I’m planning on transferring to the University of Michigan, and I’ll be majoring in Afroamerican and African studies, but I also have a strong interest in sociolinguistics,” he said. “I’m not sure what I plan to do after that, but I think I will probably try and get my master’s.”

Mitchell, a Caledonia High School graduate and a member of GRCC’s Honors Program, also is transferring to the University of Michigan.

“I will be pursuing Pre-Med while double majoring in molecular, cellular and developmental biology and biochemistry, along with a double minor in French and Spanish,” she said.

“It is rare for an institution to have multiple winners -- in 2020, there was just one winner from the state of Michigan,” she said. “Having two winners highlights how incredible our students are.”

“We know how much exponentially harder this past year has been on students,” said Seppy Basili, executive director of the Jack Kent Cooke Foundation. “It’s an honor to award this group of individuals as they have achieved so much, both in the classroom and in their daily lives.

“We are proud to welcome this new class of Cooke Undergraduate Transfer Scholars to our community and are excited to support them as they transition to four-year institutions.”

GRCC student Daniel Gebrezgiabhier received the scholarship in 2015. He is now pursuing a doctorate in biomedical engineering at the University of California-Berkley.