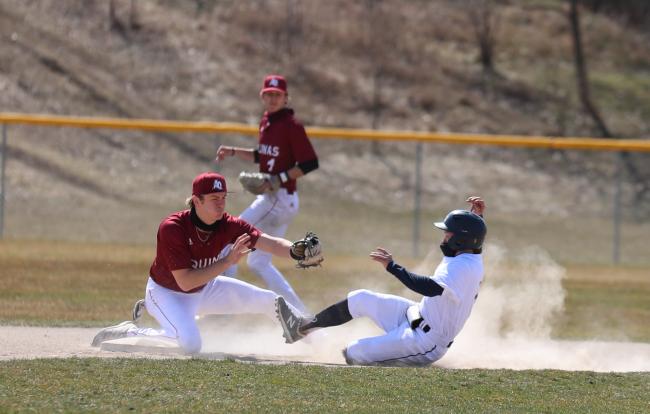 The Raiders took the first game 16-5, snagging the lead late in the game then piling on the offense.

The game was tied at four with GRCC batting in the top of the fifth when Englesman singled on a 2-2 count, scoring one run.

In the first inning, GRCC got the offense started.  Sam Schmitt singled on the first pitch of the at bat, scoring one run.

In the bottom of the fourth inning, Aquinas tied things up at four when Cameron Greener singled on a 1-1 count, scoring one run.

GRCC scored one run in the top of the sixth, and Aquinas answered with one of their own.

The Raiders then scored when Schmitt singled on a 0-1 count, scoring one run. Aquinas again answered when Dalton Vander Ark induced Greener to hit into a fielder's choice, but one run scored.

GRCC then exploded for 10 runs in the seventh inning.  The offensive onslaught was led by Jake Paganelli, Matt Williams, Schmitt, Aaron West, Ryan Dykstra, and Englesman, all knocking in runs in the inning.

Vander Ark earned the victory on the pitcher's mound, surrendering one run on one hit over one inning, walking one.  Jerad Berkenpas and Caden Van De Burg entered the game out of the bullpen and helped to close out the game in relief. Berkenpas recorded the last six outs to earn the save.

GRCC totaled 12 hits in the game. Englesman, Dykstra, Williams, and Schmitt all had multiple hits.

Game two was closer, with the Raiders still finishing on top, 5-3.

GRCC got their offense started in the first inning, when Dykstra doubled to bring in a run.

Blake Waibel led GRCC to victory, with the lefthander allowed three hits and one run over four innings, striking out four and walking one.

Englesman and Justin Kozlowski entered the game out of the bullpen and helped to close out the game in relief. Englesman recorded the last six outs to earn the save.

Jake Ryan went 3-for-3 at the plate to lead GRCC in hits.