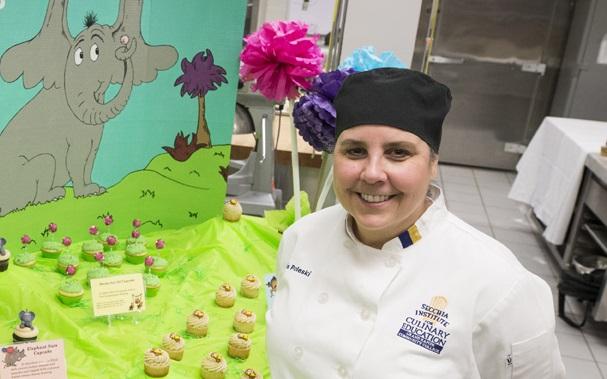 June 3, 2021, GRAND RAPIDS, Mich. -- After successful careers in law enforcement, Kris and Lars Poleski decided it was time to pursue some longtime dreams. But they wanted to build their second careers on solid skills, so they both turned to Grand Rapids Community College’s Secchia Institute for Culinary Education.

Kris Poleski retired from the Grand Rapids Police Department in 2004 as a lieutenant, and then served as a deputy police chief in Florida. She returned to Michigan to become a professor of criminal justice at Ferris State University.

“I always said that ‘someday’ I would pursue my dream of going to culinary school,” she said. “In 2017, when a dear friend of mine died at an early age, I decided life was too short to wait until I retired or for ‘some day,’ so I enrolled in the Secchia Institute’s baking and pastry program while I was still teaching at Ferris.

“Because I had a Ph.D. for teaching, I chose to pursue a certificate rather than an associate degree.”

She completed the Baking and Pastry Arts program in December 2019.

Lars Poleski comes from a law enforcement family and began his own career with the Grand Rapids Police Department in 1994. He served on patrol, community policing, the Neighborhood Police Bureau, patrol supervisor, the Internal Affairs Unit, and the Support Services Division.

When he retired in 2019, he returned to a longtime interest: homebrewing.

“I have been involved in homebrewing since the late 1980s,” he said. “I studied foreign languages in college and when I studied at the University of Augsburg in West Germany, good beer became a bit of an obsession.”

Kris Poleski had a suggestion for fixing that: GRCC’s Craft Brewing program.

“The program was a great experience and has helped me to achieve many of my goals with my own brewing,” said Lars Poleski, who earned his certificate at the end of 2020.

Kris Poleski has started two businesses, a bread company and a dessert catering business, although she’s put them on pause temporarily to care for her 1-year-old grandson. Lars Poleski didn’t plan on another job when he started the Craft Brewing program, but he found one.

“The program required me to obtain an internship in the craft beverage industry,” he said. “Joel Bierling, owner of the Bier Distillery in Comstock Park, accepted me as an intern, and that internship eventually led to my employment there.”