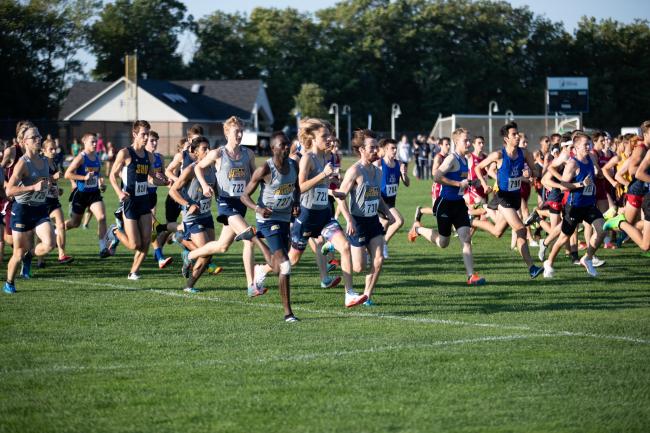 The men's team defeated Lansing for the first time in the program’s history, beating the Stars on their home course at Grand Woods Park. GRCC topped Lansing 104 to 112, with Calvin University coming in third with 115 points.

Garret Lacy was excited about the team's first win of the season – his first as head coach. The team was not racing at full strength, losing Andrew Periard to injury, but Lacy said Joshua Kipkoech, Christian Martinez-Ramos, and Lucas Schneider stepped up with breakthrough finishes.

"We had some phenomenal performances over at the Lansing Invitational today," Lacy said.

“To come away with the first-place finish today being undermanned was a great team performance and something we can take with us and build upon as we get closer and closer to the championship portion of our schedule. We have a two-week break before our next competition, so it is a great opportunity for us to really get back to hammering the training and look to make even further improvements to this team before our next race at Muskegon on Oct. 16."

The women's team took a field of 18 full teams and finished fifth overall and second among all two-year schools.  Oakland University earned the crown with a score of 36, while Lansing was second with 64 points. GRCC finished with 182 points, while the next-best two-year school, St. Clair County Community College, was 10th overall with a 254.

"Meyering and Scott are both excellent teammates and very talented runners," Becker said. "Both train and work out with a mindset to do their very best and are very determined to work and race to reach their goals and to be competitive in the race.”

Elizabeth Meyering, one of four Raiders to earn MCCAA Player of the Week honors this week, ran 21:13 and continues to improve.

“She may be the toughest athlete on our team this year,” she said. “Alex brings a lot of positive energy to our team. Her place in our team is very important. I put No Limits on Alex's potential. Alex may use her grit and determination to break her own race time records. I am looking forward to seeing and watching how close she will come to be one of the top 25 in the MCCAA.”

The Raiders are next scheduled to compete in the Muskegon Community College Invitational on Saturday, Oct. 16. Competition is slated to begin at 1 p.m. for the men and 1:45 p.m. for the women.