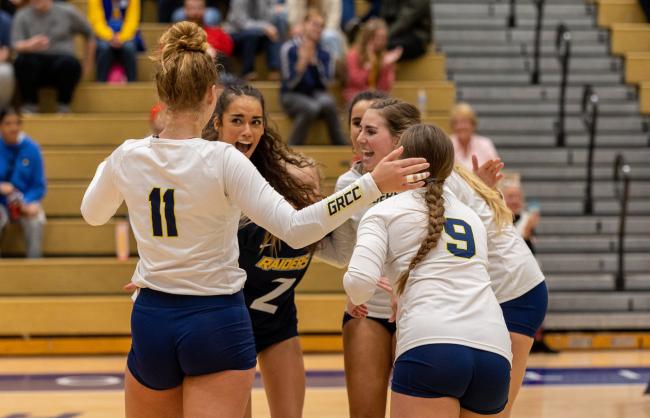 Nov. 18, 2022, CEDAR RAPIDS, Iowa – It was a victory that rendered coach Chip Will speechless.

Will, who has won 435 matches in his distinguished career at GRCC, called Friday’s victory over Iowa Central Community College one of the best.

“Speechless,” Will said after the match. “A top-five win in Raider history. The environment was electric with so many teams there watching. We definitely represented Raider Nation and GRCC with how we battled. We will remember this win for a very long time.”

GRCC, the tournament’s No. 9 seed, won a five-set match against No. 8 Illinois Central College in the opening round on Thursday, then fell to top-seed Johnson County Community College in the quarterfinals.

Berry, a freshman outside from Stanwood, had a career-high 15 kills and had just one hitting error, hitting .424 to lead the team in the Iowa Central match.

It takes 15 points to win a fifth set, and GRCC was behind 13-5. But sophomore Audrey Gower served the team back into the match and the Raiders survived, 17-15.

“I’m extremely proud of how we continued to battle back as a team after being down 13-5 in the fifth set,” Berry said. “We continued to grind and never backed down and that truly shows you what Raider volleyball is all about.”

Two other freshmen performed well, as setter Autumn Cole had a career-high 20 assists, two aces and five digs, while also earning her first kill of the year. Defense specialist Vienna Koenigsknecht had 13 digs, two aces and no reception errors in 16 attempts.

Audrey Torres wound up the team’s leader in kills with 21 and Eliza Thelen chipped in with 10.  Gower led the team with four aces and 25 digs.

GRCC, 26-4 overall, will finish the season on Saturday with a matchup against No. 3 Cowley College in the game to determine fifth place. GRCC is scheduled to play at 3 p.m. Eastern time and fans are encouraged to watch the match live on www.njccatv.com.