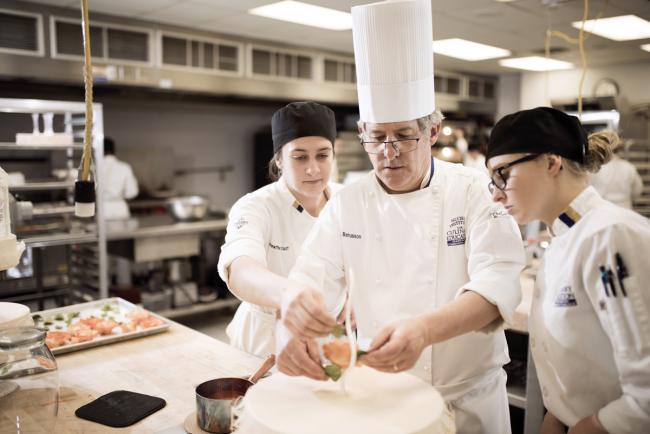 Sept. 11, 2019 GRAND RAPIDS, Mich. — A member of the French consulate will travel to Grand Rapids Community College to present a medal to chef Gilles Renusson, a professor with the Secchia Institute for Culinary Education, for his decades of outstanding service.

Guillaume Lacroix, general consul of France in Chicago, will award the Chevalier du Merite Agricole to Renusson during a private ceremony on Sept. 13. The Order of Agricultural Merit is bestowed by the French minister of Agriculture on citizens for outstanding services to agriculture. The medal, when it was created in 1883, was second in importance only to the Legion of Honour.

“This is a humbling award, which I will be receiving two days before I celebrate 50 years since the very first day I started my apprenticeship in Tours,” Renusson said. “My parents had decided that the playful childhood was over and I would now be focusing on learning. To them and every single chef and pastry chef from whom I had the chance to learn and grow professionally, I owe the biggest debt of gratitude. Never could I have been able to achieve such a level of professionalism if I had not called GRCC my home for the last 28 years.”

Renusson, a certified master pastry chef and renowned sugar artist, has been with GRCC since 1992. He received a “Brevet de Maitrise” bachelor’s degree from the Chamber Des Metiers de la Sarthe in Le Mans, France. His 20 years as a chef includes experience at Maxim’s, Fauchon and Dalloyau in Paris, the Connaught Hotel in London, the Ritz-Carlton in Chicago, and eight years as executive pastry chef at the Amway Grand Plaza.

In addition to teaching baking and pastry courses at GRCC, he leads the U.S. team for Coupe du Monde de la Patisserie, an international pastry competition, and is a member of the World Association of Chefs Societies’ Culinary Competition Committee.

Grand Rapids Community College has been offering educational opportunities in West Michigan for more than 100 years. Established in 1914, the college offers degree courses, certification and training programs, and workshops and personal enrichment classes. Offerings are held on GRCC’s downtown Grand Rapids campus, and at several locations throughout Kent and Ottawa counties, as well a