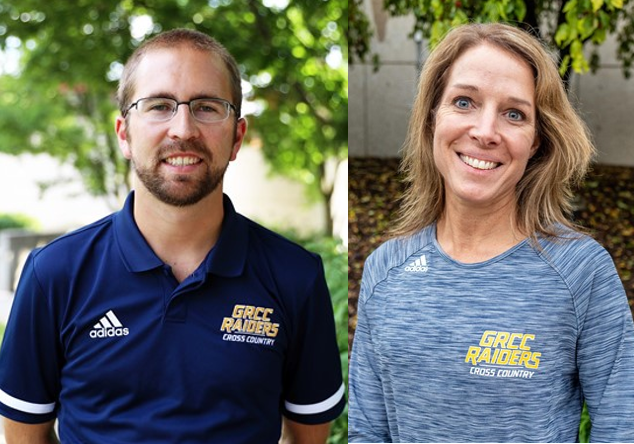 Matt Sicilia, who oversaw both the men’s and women’s teams, is stepping down from coaching to spend time with his family.

“Coach Sicilia did an outstanding job building the GRCC program into a national power,” Interim Athletic Director David Selmon said. “He’ll be missed, and we wish him well. We’re also excited to have two excellent coaches who are able to assume lead roles and keep the program headed in the right direction.”

Sicilia said his daughter will be involved in high school sports and his son in middle school sports next year, and he wants to spend more time with his family and attend his children’s events.

“Starting the program at GRCC and building a culture of mutual support and hard work, as well as bringing our program into national prominence, is something that I am extremely proud of,” Sicilia said.

“Seeing so many runners achieve success that they didn’t believe was possible is so rewarding. I’m thankful for this experience, as it will help me when I get back into coaching later in life. The team is in great hands with Garrett and Sharon taking over. I have all the belief in the world that they will continue the program’s success for years to come!”

Lacy was the head coach of the cross country team and assistant coach for the track and field team at Cedar Springs High School between 2014 and 2019.

"I plan to build on the success that Coach Sicilia has had over the past seven years of this program's restart, and continue the traditions and cultures that he has established while also bringing my own unique set of skills to the position,” he said.

Lacy said cross country is a team sport, where no individual is above the goals of the team. He also plans on having a family atmosphere and support for everyone involved.

“The cross country program is booming, and we aim to be a program that regularly competes for conference, regional, and national championships,” he said. “We have a great recruiting class coming in, probably the best in our program's history. Coupled with the runners we have returning from this past year's team that placed 9th in the country at the NJCAA D2 national meet, we see no reason why we can't be a podium team -- in the top three -- at our national meet at the end of next fall."

Becker has been on the GRCC coaching staff for five seasons. She started running to school on Grand Rapids’ West Side as a child as a means to get to and from school. She was a successful runner in high school and was a member of the Central Michigan University cross country and track and field teams.

Becker said she “pleased, grateful and excited” to become head coach of the women’s team, and looks forward to growing the team from the seeds Sicilia planted.

“Some of the things I have learned from Matt Sicilia is that being a coach is not just about the running, training, or a constant of drudgery and work,” she said. “Coaching – teamwork -- is about creating culture, building relationships, sharing the same goals, overcoming differences and obstacles, and focusing on the process rather than the end outcomes.”

Becker said she plans to train student-athletes to the best of their abilities while also cultivating team camaraderie -- and have a little fun.

“My passion for coaching was cultivated because there were coaches in my life who took time to coach me when I was young,” she said. “My high school and college coaches were important mentors that helped me with so much more than only training me to run faster. Coaches like Larry Fisher, James Schaff, and Keela Yount helped me grow to be a better person -- even though I took it for granted when I was young.”

The success at the National Champions capped off a season where the Raiders dominated regional and conference competition. Both teams won the Michigan Community College Athletic Association and NJCAA DII, Region XII titles, the first since the rebirth of the program in 2014.