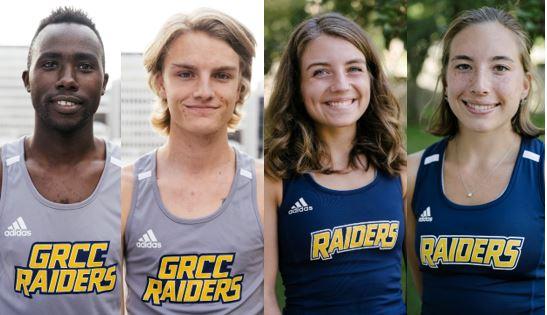 It’s the second year in a row both GRCC teams finished in the top 10 nationally, with multiple runners earning All-American honors in Richmond, Va. on Saturday.

“I’m so happy for our team!” women’s coach Sharon Becker said. “The six women on this team are women of character and each one of them helped each other surpass what each only could accomplish alone. Because of the integrity, grit and caring attitudes, these women and this team have accomplished so much together.”

Becker said Meyering and Scott earning All-American honors was a big goal. Scott’s time was 19:29.5 and Meyering finished at 19:35.9.

“They could not have earned a top-15 spot if they let up and slowed down for even one second. They both ran a personal best time by over 15 seconds!”

“Their performances were even better than we had hoped for,” she said. “Those two ran harder than they have ever done before.”

Becker and assistant women’s coach Stephanie Thomas are in their first year at the helm, as is men’s team coach Garrett Lacy.

“I’m so proud of the guys and how they raced today," Lacy said. "To not be at full strength and still come away with a seventh-place team finish -- third-best in men’s program history -- is truly incredible and a testament to all the hard work this group has put in this season.

"We are also leaving with two All-Americans in Josh Kipkoech and Coleman Clark, just the second time we’ve had multiple All-Americans in the same race, and Josh became the third two-time All-American in men’s program history. I’m proud of what we’ve accomplished this season and even more excited for the future seasons to come. This group is hungry and I’m confident they will return next season even better and accomplish even more. It’s a great day to be a Raider!”

Kipkoech, a native of Kenya, ran the 8K race in 25:55, with Clark, a freshman from Carson City, right behind him with a time of 25:58.9. Clark earlier in the month was named NJCAA DII National Athlete of the Week after winning the MCCAA-NJCAA Region XII cross country championships.

GRCC’s teams each finished in seventh place nationally, a year after the women’s team finished in fourth place and the men’s team in ninth.