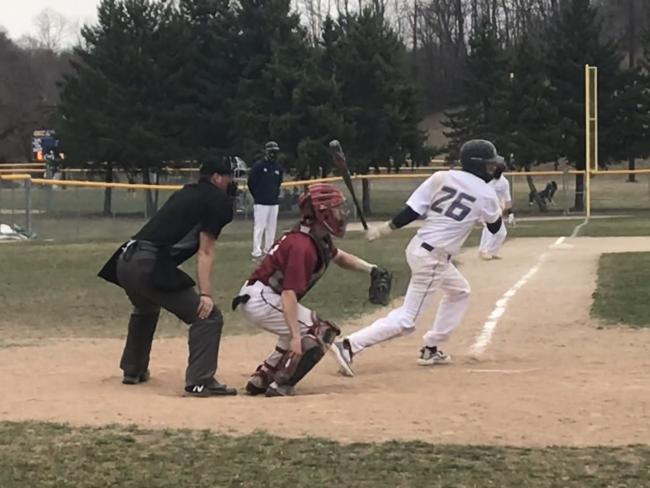 The Raiders are now 10-1 on the season, having not lost since the opening game.

It looked like GRCC’s streak might have been coming to an end in the first game. Lake Michigan scored three runs in the first inning on a home run by Roman Kuntz.

GRCC team was down 4-2 in the sixth inning when Fernando Calderon homered on a 3-2 count, scoring three runs.

The Raiders tacked on one more run in the top of the seventh to claim a 6-4 victory.

Collin Bradley earned the win for the Raiders, going five innings and allowing four runs on five hits and striking out one. Eliott Traver and Sam Schmitt helped to close out the game in relief.  Schmitt recorded the last three outs to earn the save.

Schmitt went two-for-three at the plate to lead GRCC in hits.

The Raiders didn’t commit an error. Calderon, in right field, had six chances in the field, the most on the team.

GRCC in the second game fell behind 3-0 in the first inning on Roman Kuntz’s second homer of the day, then never looked back. The team answered with four runs in the top of the second inning, added single runs in the fourth and fifth innings then two more in the six to put a 8-3 game in the win column.

Garrett Cheslek pitched the Raiders to victory, surrendering three runs on six hits over five and two-thirds innings, striking out one. Bradley Dunn threw one and one-third innings in relief out of the bullpen to earn the save.

The Raiders are back in action against Lake Michigan on Saturday with a doubleheader at home in Belknap Park.