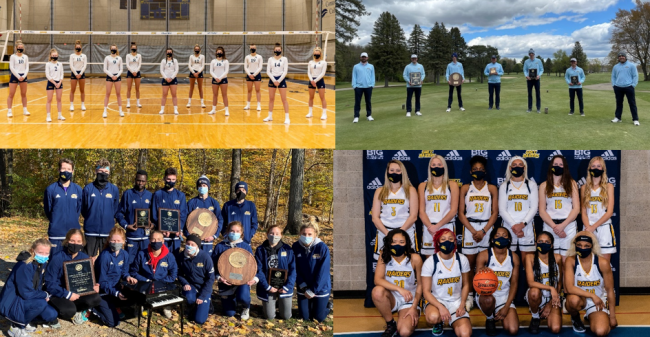 Three GRCC teams finished in the top 10 nationally, with the golf team falling just shy. The college also celebrated five student-athletes earning All-American honors, including a Player of the Year. Three coaches were named Coach of the Year.

“I’m proud of our student-athletes, who this year faced challenges we never could have imagined,” GRCC Interim Athletic Director David Selmon said. “We made student success and safety a priority. Seasons were delayed and abbreviated, and we made safety a priority. Everyone pulled together to compete, and demonstrated our GRCC programs are among the best in the nation.”

Former Coach Matt Sicilia was named Coach of the Year by both the MCCAA and the NJCAA Region 12.

The volleyball team’s season was delayed for months and shortened due to the pandemic, the program continued to be successful.

The team was runner-up in the regional tournament, but was able to participate in the NJCAA D2 National Tournament after Muskegon Community College withdrew due to health concerns. The Raiders inished tenth in the nation.

Kailey Carmean and Kara Hecht were named Honorable Mention All-Conference and Hecht was named to the All-Freshman team.

Oberlin was named to the All-Tournament team for her outstanding performance.

The women’s basketball team posted a 12-5 season record, a second-place finish in the conference, a district championship and a national tournament appearance – the program’s first since 1978.

Hawkins, a sophomore from Grand Rapids, earned All-Region, All-MCCAA honors along with teammate Jayla Bibbs, who was one of the best rebounders in the nation.

Bibbs Hawkins and Green-Boyd were also named to the All-Defensive Team. David Glazier earned Coach of the Year honors.

The GRCC golf team finished in eleventh place in the NJCAA National Tournament, capping off a season that saw the Raiders dominate conference competition.

The Raiders wrapped up a regular season winning every tournament, with five golfers earning All-Conference honors and John Forton being named Coach of the Year.

The team finished the weeklong NJCAA D2 National in eleventh place out of 19 teams.

Tyler Hausserman, Logan Templeton, Davis Courtright, Dominic Luciani, Arie Jackman -- posted the top five scores in the conference for the season, and were named to the MCCAA’s All-Conference team.

While the other three GRCC teams did not reach the national tournament, they had reasons to cheer.

The baseball team was tied for first place with a 24-11 record when its season ended in its final weekend due to wellness concerns.

Sam Schmidt, Fernando Rivera-Calderon and Caleb Engelsman were named to the Honorable Mention All-Conference team. West was one of six players named to the All-Freshman Team.

The men’s basketball team suffered a string of last-second losses, and participated in the postseason.

Isaac Anderson was named Co-Defensive Player of the Year. Anderson and Chandler Collins were named to the Second Team All-Conference team.

The softball team started slowly, but showed promise for next year with many players likely to return.

Five members of the team finished batting .300 or better for the season, led by second-year player Siewertsen, who batted .373. The third basemen also led the team with 31 hits, five stolen bases and an on base percentage of .418.  The slugger also struck out just once in 100 plate appearances.