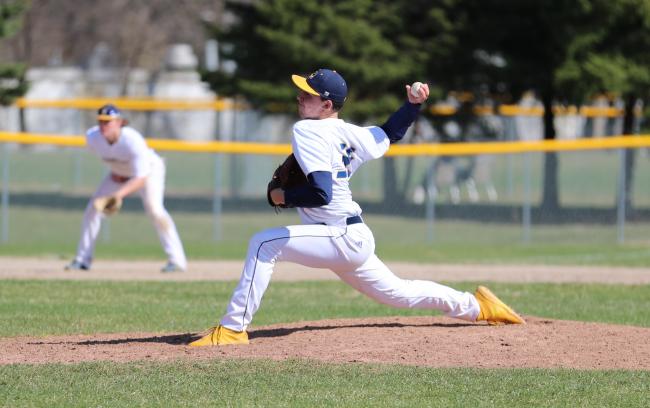 Campbell is turning professional, but several other recent Raiders are continuing athletically and academically at four-year colleges.

Campbell, a 2017 Belding High School graduate, played his first year of collegiate baseball at Mesa Community College in Arizona before coming back home and attending GRCC. Posting an 8-3 record for the Raiders in 2019, he led the team in wins, was second in ERA with 3.23 and had 52 strikeouts in 43.1 innings.

"GRCC was a place for me that I was able to focus on the important things in my life,” he said. “With the new facilities it felt like a D1 atmosphere. I was able to do what I need at GRCC to develop as a baseball player."

Campbell transferred to the University of Charleston, where he dominated his competition while improving his velocity and adding more pitches to his repertoire. In two seasons there, one of them cut short due to COVID-19, he accumulated a 13-1 record, with a sub3.00 ERA and 145 strikeouts in 91 innings.

He was signed by the Twins as a free agent, and is heading to the team's Fort Myers, Fla. training complex. He'll soon learn his first destination for the organization.

"Going to JUCO was one of the smartest decisions in my life,” Campbell said. “It gave me two more years to develop so I could get better opportunities than I did out of high school. Work ethic is the biggest thing I learned while being in junior college because you are the only one that decides your future."

Campbell is one of several Raiders who will continue to compete in new places in the year ahead.

The women's basketball team, which won its district and competed in nationals this past season plans to bring back many players, but starting forward Danielle Lamancusa chose to continue her athletic career at Alma College.

The All-Conference native of Rockford played and started in every game for the Raiders during her two years at GRCC, averaging just over 10 points and about seven rebounds a game.

The men and women's cross country teams, which competed at nationals the past two years, have a couple runners so far that have committed to run at the next level this fall; Noah Peterson is headed to Rochester University and Diana Candela will run for Ferris State University.

Krin Beach of the softball team signed to play for Cornerstone University.  Beach, a Lowell High School graduate, played and started in all 30 games this past Spring and batted .261 while posting a stellar .948 fielding percentage.