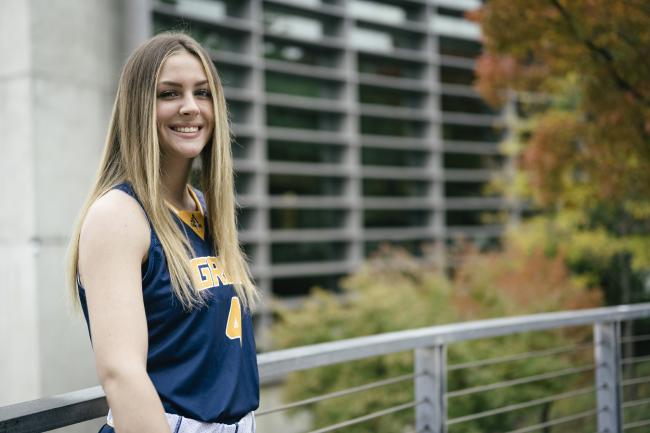 The GRCC women's team, now 2-5 on the season, scored a season-high 27 points in the second quarter against the MCC Bears and led by 11 points at the break, 43-32.

Mott clawed all the back to tie the game for the tenth time with 1:29 remaining on the clock. But Sally Merrill hit a go-ahead bucket to make the score 67-65 in favor of the Raiders.

After trading possessions, the Bears' Hunter Weeder had a chance to tie the game once more with nine seconds remaining, but made just one of two from the free throw line.

With five seconds to go, Emersyn Koepke went to the line for the GRCC and connected on both throws to put her team up three and seal the victory.

Coach David Glazier was pleased with how his team performed in the last two days.

"I thought our kids played with an improved level of intensity this weekend,” he said. “We saw a number of them contribute more this weekend than in earlier opportunities so far this year, which shows growth. We will need everyone to find how they best help the team, and do it consistently for us to find consistent success."

Lodes, a freshman from Comstock Park who graduated from West Catholic High School, finished with her third double-double with 16 points and 10 rebounds, while adding four assists, five blocks and three steals.

Merrill, a freshman guard from Allegan, nearly had one herself, finishing with 15 points, nine rebounds and three blocks.

GRCC's men’s team battled tough against the No. 1 ranked team in the nation, but dropped their second game in a row to fall to 4-5.

The Raiders only trailed by three points with 9:55 left in the first half, but were outscored by 19 the remainder of the half, trailing 50-28.  Moore, a Forest Hills Northern grad, got the Raiders to within 13 with 12 minutes left in the game, but that's as close as they would get.

"When you play one of the top teams in the country, your effort has to be relentless and your execution has to be sharp," head coach Joe Fox said. "I thought our effort level was where it needed to be, but when we missed on execution Mott would always capitalize. Andrew Moore played a great game. We’re looking forward to getting another chance to play them."

Moore's 22 points came on 10 of 17 from the field and 2 of 2 from the free throw line.  Brockton Kohler, of Greenville, chipped in with 11 points and six rebounds while Matt Richards, of Byron Center, grabbed a game-high 11 rebounds.

Both squads will be back in action on Dec. 8 at Mott Community College. The women's team is scheduled to tip-off at 5:30 p.m. with the men to follow.  Games will be streamed live for fans who can't attend.