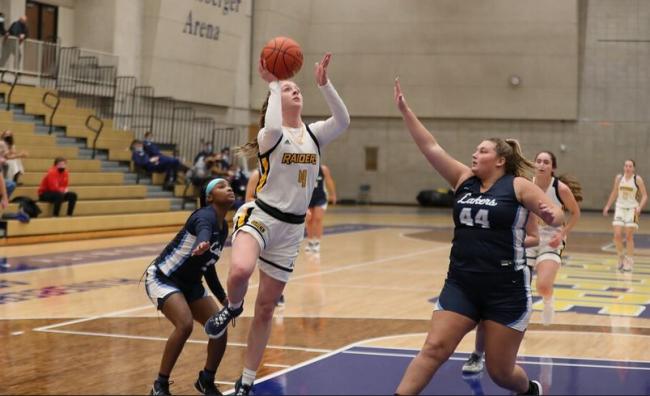 GRCC was in front for much of the game, leading by as many as 12 points. Muskegon, with a 9-3 overall record, battled to keep the score close.

Down 46-41, Muskegon’s Mariah Pringle made a lay-up with 21 seconds left. Following a GRCC turnover, she connected a three-pointer to tie the game at 46 with just 11 seconds remaining.  Pringle would finish with a game-high 16 points to go with seven rebounds and six blocks.

GRCC’s Marlene Bussler, of Harper Creek, was fouled with eight seconds remaining and connected on both free throws giving her team the lead back.

Muskegon’s Julia Tierman had a chance to tie it up with two free throw chances of her own, but made just one. Bussler finished the GRCC scoring by making one more free throw with under two seconds to go.

Lodes, who hadn't played in 16 days, was two blocks away from a triple-double, but still finished with the fourth double-double of her Raider career with 12 points and 12 rebounds.

The victory improved GRCC’s record to 7-7 and moved the team to second place in the conference in the latest MCCAA standings.

GRCC rushed out to an 11-point lead, but Muskegon outscored the Raiders by 10 in the final four minutes of the half to lead by eight points.

The Raiders, playing from behind the entire second half, tied the game once, but couldn't match the big runs Muskegon went on the rest of the way.

Andrew Moore, of Grand Rapids, scored 19 points on 7 of 14 from the field, but no other Raider reached double-digits in the scoring column.  Nyuon Nhial, of Grand Rapids, nearly had his first career double-double with nine points and 10 rebounds.

Both teams will be back on the road Jan. 22 in a doubleheader against Kalamazoo Valley Community College. The women's game is set for a 1 p.m. tip-off.