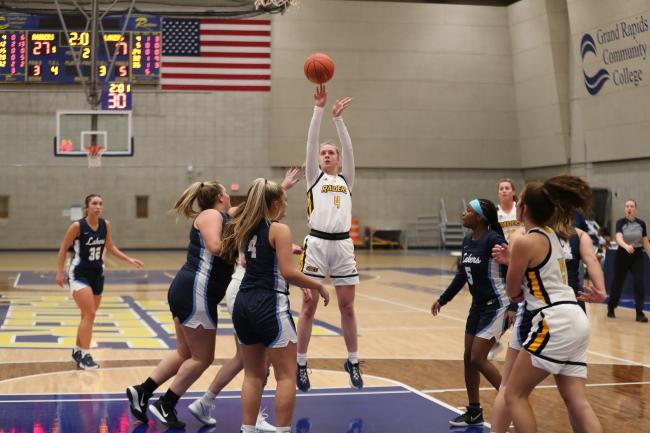 The men’s team fell short in a game where the lead changed 13 times.

The women’s team (10-7, 6-1) is on a five-game winning streak, holding on to the second spot in the MCCAA Western Conference standings. GRCC has now beaten Ancilla (4-7, 1-6) in six consecutive games, dating back to 2019.

Alayah Chapman, with 16 points and 18 rebounds, kept the Chargers in the game, with her team trailing by just one at the half. But the Raiders pulled away late in the third quarter and never looked back.

“Tonight, was not one of our best performances and credit for that goes to the effort and play by Ancilla,” Coach Dave Glazier said. “Our kids found a way to get it done and I’m proud of all 11 tonight.  I know to a person they understand they’ve got better basketball in them.

The men's game was fast-paced, with the lead changing throughout the contest. But GRCC fell by a final score of 103-98.  The Raiders dropped to 8-11 overall and 3-5 in the conference while the Chargers improved to 10-3 and 6-1.

GRCC had a chance in the final minute after Andrew Moore made it a two-point game and then got a steal on the other end. But Moore couldn't get the game-tying basket to fall and the Chargers held on.

"Great team effort tonight," Coach Joe Fox said. "Came up a play or two short, and once again, post-game we talk about the little things here and there.  I've been telling my guys all year we're building for March, and I still think we're right there. There will be some good and some bad to break down on film. But at the end of the day, you have to be the team that makes the winning plays."

Point guard Danyel Bibbs had his best performance in a GRCC uniform, putting up a team-high 27 points and six assists. Bibbs was 10 of 14 from the field and 6 of 8 from the free throw line.

Round two of the MCCAA Western conference schedule begins on Jan. 28 at Mid Michigan College. Both GRCC teams won in their first meeting on Jan. 3.  The women's team tips off first at 1 p.m.