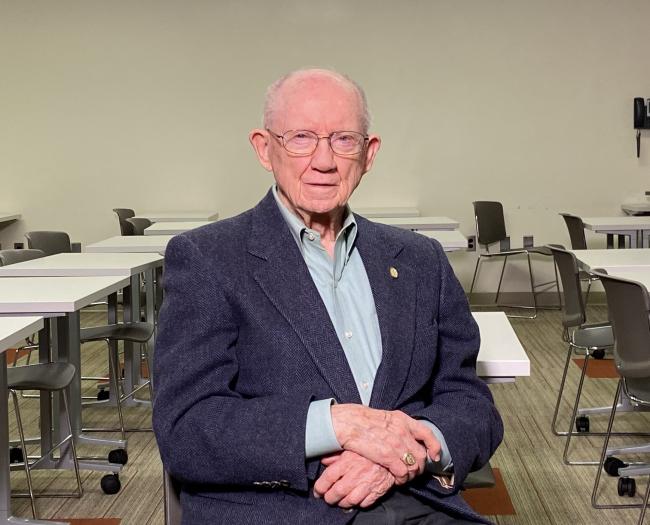 Loyd Winer’s sister was an excellent student, but after their father paid for her to attend Michigan State University, she didn’t go. Winer was told to get a job at Michigan Bell as he wasn’t college material. Michigan Bell required at least a two-year degree, so he enrolled at what was then Grand Rapids Junior College.

Winer’s father made him pay his own way. The first year at GRJC, he took all the classes he should have taken in high school: chemistry, calculus, trigonometry. The second year, he “finally figured things out” and started to excel.

“You have to apply yourself and it will come,” he said. “Keep trying – you can do it.”

After graduating from GRJC in 1950, Winer went on to earn bachelor’s and master’s degrees in civil engineering from MSU.

After serving in the Navy on the USS Ticonderoga, he joined J. & G. Daverman Co. His engineering work took him across the United States and many countries. One of his most memorable projects was designing the original runways and taxiways for Gerald R. Ford International Airport – he still checks up on them from the public viewing area once or twice a week.

In 1969, he co-founded Grand Rapids Testing Service and Newhof and Winer Inc. He helped design buildings for Herman Miller and Amway and foundries in Newaygo, Ionia and Mexico. After selling his share in the businesses to his partner, Paul Newhof, he worked for insurance agencies, reviewing building liabilities and often testifying in court.

Winer hasn’t forgotten his beginning in higher education: He and his wife, Suzanne, who passed away in 2018, established the Loyd and Suzanne Winer Scholarship through the GRCC Foundation. The fund targets students enrolled in STEM programs – science, technology, engineering and math – at GRCC.