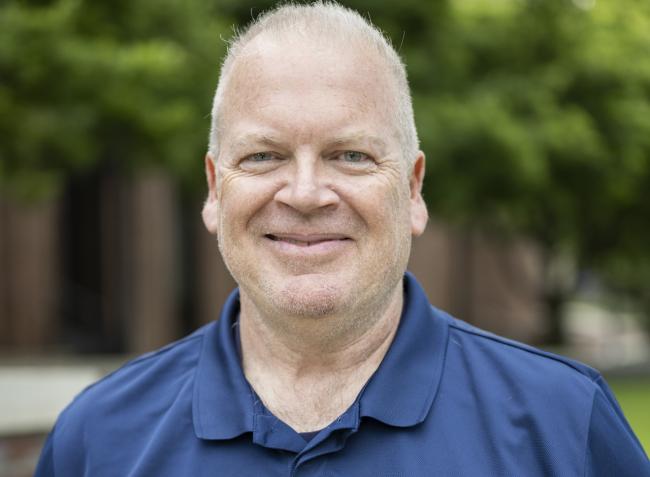 June 7, 2022, GRAND RAPIDS, Mich. - Mike Roche, who assisted generations of Grand Rapids Community College student-athletes as athletic trainer, is being honored by having athletic scholarships named in his honor.

Roche has served GRCC students for 28 years. His departure, a year after receiving the National Athletic Trainer of the Year from the National Junior College Athletic Association, is one of several changes in the GRCC Athletic Department as the program wraps up the 2021-2022 year.

Roche earned national honors for his focus on athletic training, pandemic wellness protocols and keeping GRCC student-athletes safe and physically prepared during a pandemic season both historically challenging and successful.

In addition to supporting about 150 athletes each year in partnership with physicians and medical specialists, Roche’s duties included overseeing student trainer interns, NJCAA compliance requirements, equipment and uniforms for all of the college's teams. He also taught athletic training classes for GRCC.

Michael Roche A.T.C. Athletic Scholarships next year will be awarded to one GRCC student-athlete on each of the program’s eight teams. Students are selected by the Athletic Department. People can donate to the scholarships at grcc.edu/donate.

The baseball program is losing two longtime coaches after a season that included a second-place conference finish and a third-place regional finish. The team also celebrated a 17-game win streak that was snapped in the late rounds of the NJCAA Region 12 tournament.

Carl Pohlman is retiring from coaching after serving his last four years under head coach Mike Eddington, primarily working with the pitching staff. His plans to spend more time with his wife, children and grandchildren, travel more, and volunteer for various causes.

"I am grateful to Coach Eddington for allowing me to work with the team for the past four years," Pohlman said. "He is a great coach and an even better man.  GRCC is well served for having him as their head coach!  He bleeds Raider blue! I will miss the players and the daily interaction with the team and the coaching staff and I will continue to support the Raiders anyway that I can."

Mark Rasmussen is transitioning from assistant baseball coach to assistant golf coach during the 2022-23 school year. It will be the fourth sport he has coached at GRCC, previously working with men's and women's basketball teams.

"My time working with the coaching staff and all of the players has been unforgettable," Rasmussen said. "I'm truly going to miss watching the players grow and develop into better people and baseball players. Moving on, I am excited to be able to work with one of my best friends, John Forton and help the golf team compete for a national championship."