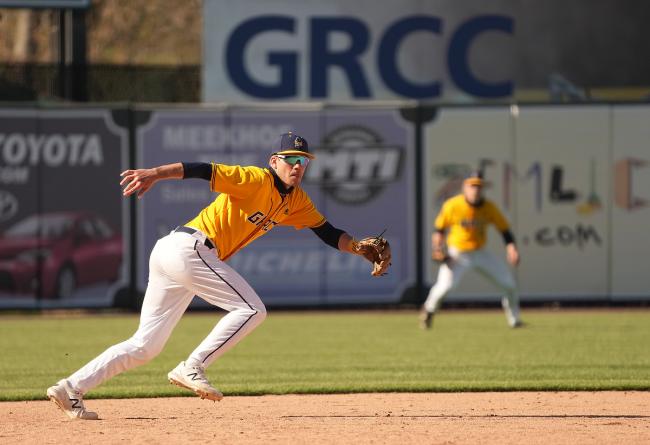 The teams took the field at Lake Michigan Credit Union Ballpark – home of the West Michigan Whitecaps. It was the first games played at the ballpark since 2019, and the first with the stadium’s new name.

The event was a celebration of Community College Month, and included performances by GRCC Music students and recognition of alumni and student-athletes.

The first game was pitchers duel, with GRCC’s Collin Bradley taking a shutout into the final inning. Kellogg, ranked No. 6 in the nation, scored three runs in the top of the seventh, winning 3-1.

Jayden Dentler got the win for the Bruins, going seven innings, allowing one run on two hits and striking out 10.

Bradley took the hard-luck loss, allowing just three hits and three runs over seven innings, striking out 10 and walking none.

Aaron West and Sam Schmitt had GRCC’s two hits, with Schmitt being the first player to score a run in the newly christened LMCU Ballpark.

The Raiders fell behind 5-0 in the second game, but nearly came all the way back, eventually losing 6-5.

GRCC scored two runs in the bottom of the fourth inning on singles by Caleb Englesman and Payton Young. The Raiders added three runs in the sixth inning, led by singles by Ryan Dykstra and Englesman.

Ashton Potts earned the win for Kellogg CC and Ryan Vought recorded the last four outs to earn the save.

Drew Murphy took the loss for the Raiders.

GRCC collected 10 hits, led by Dykstra, who went 3-for-3 with two runs scored and an RBI. Englesman drove in three runs on two hits.

The Raiders are now 14-9 on the season, and are back in action on Tuesday, April 20 with a doubleheader against Davenport University’s JV team at Belknap Park.

The GRCC softball team lost the first game of its doubleheader against Jackson College 15-0 in Jackson, but powered to a win in the nightcap, 9-8.

Taylor Cross hit a home run to put the Raiders in the lead. Kate Stearns had a huge day at the plate and in the field and Mariah Redding pitched the team to victory.