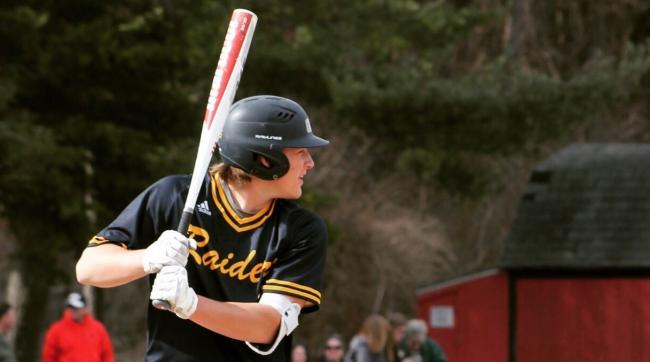 April 9, 2021, GRAND RAPIDS, Mich. – The Grand Rapids Community College baseball team snapped a five-game losing streak with a 10-2 victory in the nightcap of a Friday doubleheader against Muskegon Community College.

GRCC dropped a heartbreaker in the first game, with Muskegon rallying late for a 6-5 win.

MCC trailed 5-4 in the top of the seventh inning when Matt Corrado doubled on the first pitch of the at-bat, scoring two runs.

GRCC went out in front in the second inning when Sam Schmitt grounded out, scoring one run.

Grant Martin earned the win for Muskegon, surrendered no runs on two hits over four innings, striking out two and walking one.  Jacob White threw one inning in relief out of the bullpen.

Collin Bradley took the loss for the Raiders, allowing five hits and five runs over six innings, striking out four.

Schmitt went 2-for-4 at the plate to lead GRCC in hits.

In the second game, GRCC exploded for six runs in the sixth inning to seal a 10-2 win.

Caleb Englesman, Keaton Peck, Fernando Calderon, and Schmitt each had RBIs in the frame.

Garrett Cheslek earned the win, allowing three hits and two runs over five innings, striking out two and walking one.  Schmitt threw two innings in relief out of the bullpen, recording the last six outs to earn the save.

The Raiders collected eight hits on the day.  Calderon and Schmitt all managed multiple hits. GRCC was sure-handed in the field and didn't commit an error. Peck had the most chances in the field with six.