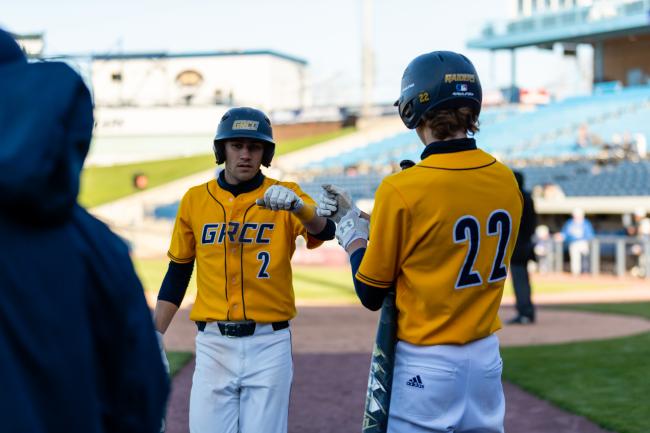 April 20, 2021, GRAND RAPIDS, Mich. – The Grand Rapids Community College baseball team split a doubleheader against the Davenport University JV squad on Tuesday, piling up 11 hits in the opener to secure a 7-4 win.

The team fell short in the night cap, 4-2. The GRCC softball team continues to struggle, dropping both of its games.

The Raiders fell behind in the third inning of the first game, then powered to seven runs in the bottom of the frame, a rally started by Payton Young’s triple.

Justin Kozlowski earned the victory on the mound for Grand Rapids Community College. The righthander allowed three hits and two runs over one inning, striking out one and walking none. Dalton Vander Ark and Blake Waibel entered the game out of the bullpen and helped to close out the game in relief.  Vander Ark recorded the last five outs to earn the save.

The Raiders could not generate as much offense in the second game, falling 4-2.

Keegan Spomer took the loss for GRCC, allowing two hits and two runs while walking none in one inning.

Caleb Englesman was solid on the mound, pitching three innings, allowing five hits and one run while striking out one and walking one.

The Raiders are now 15-10 on the season, and back in action on Friday at home against Glen Oaks Community College.

The softball team lost both games of its doubleheader on the road against Kalamazoo Valley Community College, dropping the first game 19-7and the second game 17-0.

The team is 3-19 and next plays on Saturday against Ancilla College.