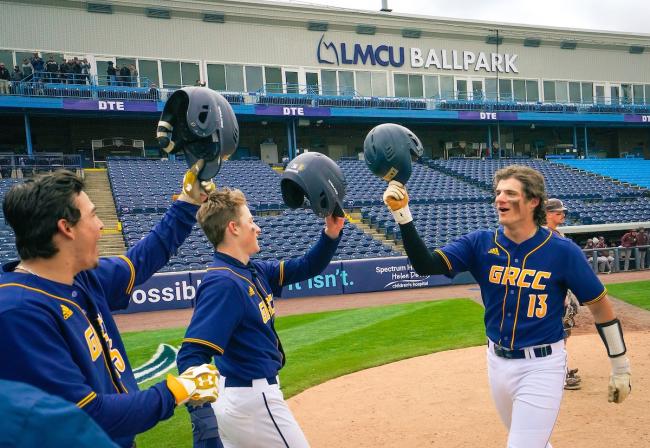 The team won the first game 9-3, and the nightcap 4-3 to finish alone in second place in the MCCAA Western Conference.

A two-out, two-run single by Ancilla in the bottom of the second inning put Ancilla on the board first in game one.

GRCC wasted no time to tie the game up, sending eight batters to the plate in the next inning plating two runs of their own on back-to-back base on balls.

Zacarias Salinas broke the tie with a two-run double in the fifth inning and the team never looked back. A four-run seventh inning for GRCC kept starter Caleb Engelsman on the mound and he finished off his second straight complete game with his sixth strikeout.

Seven different Raiders had at least one hit, with cleanup hitter Dylan Chargo going two-for-three with an RBI.

Just as the first game, Ancilla got on board first with a two-out, two-run single. GRCC responded to tie it up in the next inning after a double by Max Varon and a Peyton Young single.

Down 3-2, Ancilla used a sacrifice fly in the bottom of the fifth to tie the game up again.

Engelsman drove home the go-ahead run in the sixth and GRCC hung on despite Ancilla stranding a man on third after putting the first two batters on.

Eliott Traver earned his ninth save by getting the final six outs of the ball game.

GRCC totaled 12 hits including two each from five different players.

GRCC has won 14 games in a row since a 3-3 tie against Calvin University on April 19 at LMCU Ballpark.

The team finished second in the conference and will prepare for the regional tournament on Thursday, May 12.