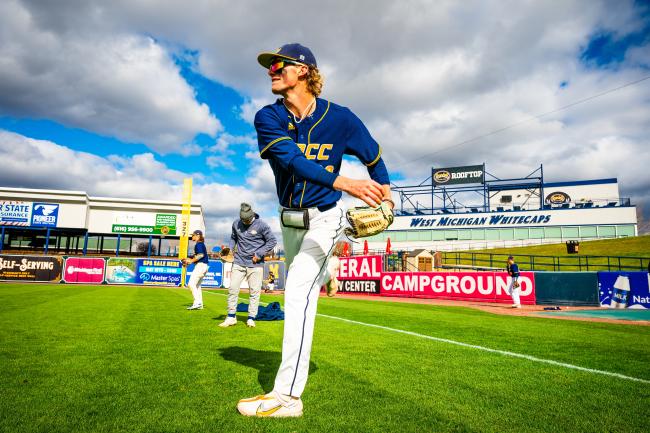 May 6, 2022 - GRAND RAPIDS, Mich. - The Grand Rapids Community College baseball team is postseason bound after shutting out Ancilla College on Friday, 10-0 and 2-0.

GRCC ace Jerad Berkenpas, now 7-2 on the season, had seven strikeouts - including five in a row - helping the team to a five-inning run-rule win in game one of the four-game series.

After going without a hit in the first inning, the GRCC bats came alive in the second frame with five of the team’s seven hits, while scoring eight runs. Dylan Chargo hit his fourth home run of the season, a grand slam, and one batter later Xander Reisbig crushed his third home run of the year.

Max Varon ended the game with a one-out, walk-off single to score Zacarias Salanas in the bottom of the fifth.

Eliot Traver picked up his eighth save of the season, striking out all three batters he faced in the seventh.

Ryan Dykstra drove in the only two runs for GRCC, after a double in the first and a homerun in the third. Dykstra, who plans to play for Oakland University next season, now has a team-best seven home runs.

GRCC, which started the season 1-10, has won 12 games in a row since a 3-3 tie against Calvin University on April 19 at LMCU Ballpark. The team will finish its series with Ancilla and the regular season with a double header in Donaldson, Ind. on Saturday.

The team will finish either second or third in the conference and will await its seed for regional tournament, which begins Thursday, May 12.