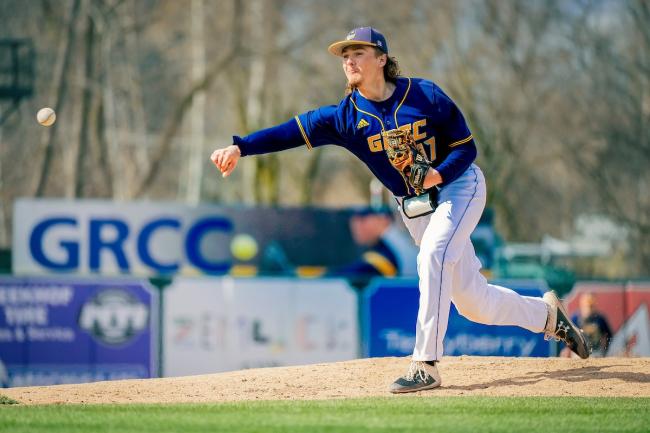 May 20, 2022 - ADRIAN, Mich. – The Grand Rapids Community College baseball team's season ended on Friday, with the team losing both games in the NJCAA Region 12 tournament.

Lansing, ranked No. 8 in the final NJCAA poll, scored seven runs in the second inning, creating a deep hole for GRCC’s offense. The Raiders responded with two runs in the top of the third inning, but were unable to score during the rest of the game.

The loss snapped GRCC’s 17-game win streak, and sent the team to the elimination round.

GRCC was held to four hits in the opening game. Catcher Dylan Chargo, had two of them, with Ryan Dykstra and Andres Rivera-Calderon collecting one each.

In the final game, fifth-ranked Kellogg avenged Thursday’s loss to GRCC by staying in front for the entire game and advancing to the tournament championship game.

Kellogg out-hit GRCC nine to seven, and was perfect on defense.

GRCC finished the season 31-22-1 despite losing their first ten games down on their spring trip against NJCAA Division 1 competition.

Post season awards are scheduled to be announced Tuesday at 10 a.m.