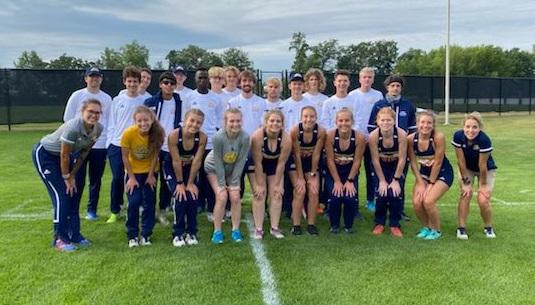 Sept. 4, 2021, GRAND RAPIDS, Mich. -- The Grand Rapids Community College cross country teams faced stiff competition in the first meet of the season, racing against some of the best teams in the country in NCAA D2, NCAA D3, and the NAIA.

The cross country teams are coming off a successful 2020 season, with both finishing in the top 10 nationally and three runners earning All-American honors.

New men’s team coach Garrett Lacy said he was excited just to see all 15 runners healthy and ready to go on the start line. When he came to GRCC two years ago the team had just three runners competing at the first race.

“Our men fought very hard against some intense competition, probably the toughest field they will face all season long against teams from NCAA D2, NCAA D3, and NAIA,” said Lacy, who was assistant coach last season. “There were top 25 teams in the country from all three of those divisions in the race today. This environment was more competitive than what we will even see at our national meet, and that big meet experience is invaluable.”

The men were led by freshman Coleman Clark, who was out in front of GRCC from start to finish in an impressive time of 26:48 for the 8k distance.

“We are off to a good start to achieve everything that we set out to achieve at the start of this year, and we will use this experience and learn from it and come back to this same course two weeks from now for our own home invitational and look to be even better than we were today," Lacy said.

The women’s team found 2020 All-American Audrey Meyering and newcomer Kaylee Scott working together the first mile of the race. At the one-mile mark and after the steep hill, Scott was feeling better and was able to propel away from Audrey, maintaining her 6:30 pace.

Meyering focused her attention on pushing through the race with “heavy legs” as best she could, maintaining a respectable race pace and not falling too far back from her teammate and finished in 60th place with an average pace of 6:49 per mile.

Scott ran like a seasoned veteran despite being a freshman in her very first college race.

“The event today was a great experience for Kaylee,” women’s coach Sharon Becker said. “She proved today that she is on path to be able to compete alongside All-American Audrey Meyering as a top runner in the MCCAA Conference and at the NJCAA Region 12 – and even at NJCAA D2 Championships. Both of GRCC’s new runners, Kaylee and Rose Meyer, ran very well today. They both will continue to get better throughout their season and will make a great contribution to our team.”

“We are only finishing our fourth week of training together as a team,” Becker said. “At practices and at our overnight team camp, we have talked a lot about the importance of making progress through small steps - and to work on the process - to not focus on only the end results.”