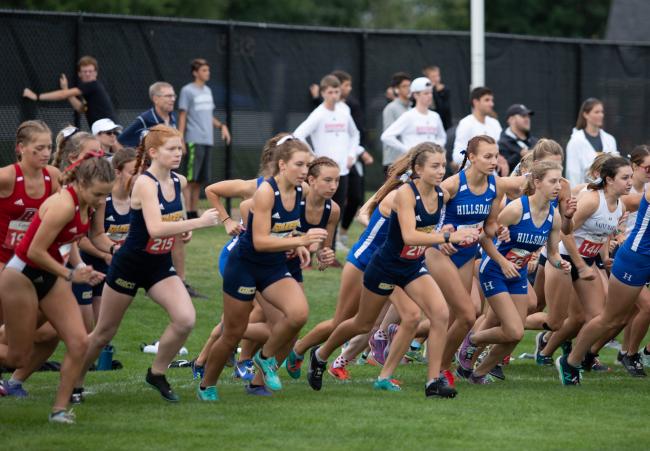 Sept. 12, 2021, GRAND RAPIDS, Mich. – Grand Rapids Community College cross country teams are among the very best in the nation, with both the men’s and women’s teams ranked in the top five in the first U.S. Track and Field and Cross Country Coaches Association poll of the season.

The men’s team tied for No. 3 in the nation for National Junior College Athletic Association Division II, and the women’s team was ranked No. 4, following the first meet of the season, where the Raiders competed against four-year colleges at the Calvin Knight Invitational on Sept. 4.

“The RedTails recently finished fourth as a team at the Corridor XC Clash hosted by Mount Mercy and put four runners in the top-25. The Raiders recently took part in the Calvin Knight Invited hosted by Calvin University and saw a young team gain valuable race experience at the collegiate level,” the association posted on its website.

Clark, a freshman, was out in front of GRCC runners from start to finish in the Calvin race, with an impressive time of 26:48 for the 8K distance.

Kipkoech returns to the team after being named an NJCAA DII All-American last season. All-American Audrey Meyering is returning to the women’s team.

Scott finished a solid 40th place among runners from NCAA DII, GLIAC & NAIA schools in the Calvin event, with a final 6K time of 24:32, a 6:35-per-mile pace. Meyering followed her teammate and finished in 60th place with an average pace of 6:49 per mile.