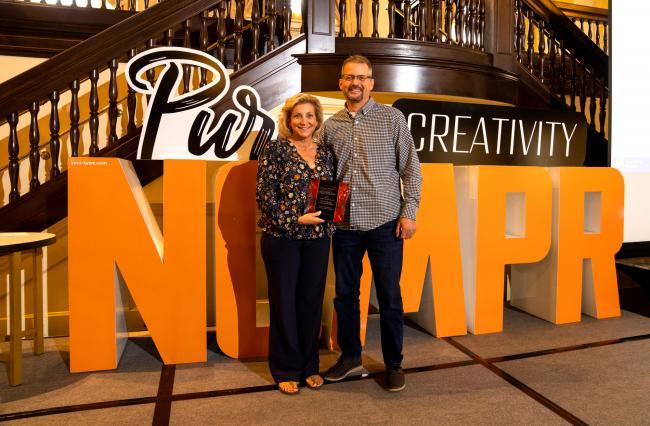 The awards were among seven Medallion Awards earned by GRCC and presented by the National Council for Marketing and Public Relations District 3, which includes community, technical and junior colleges in Illinois, Indiana, Michigan, Ohio, Wisconsin and the Canadian province of Ontario.

The GRCC team earned a Gold Medallion in the competition’s Government or Community Relations Campaign category for telling the story of Dr. Biden’s May visit to a campus popup COVID-19 vaccination clinic.

The second Gold Medallion Award was for a series of cards sent to students following the fall 2020 and winter 2021 semesters, encouraging them to be resilient during the pandemic, and to know there are people on campus ready to support them through challenging times.

“The branding and messaging was spot on in conveying resiliency and a culture of caring. The card is beautifully designed and impactful," judges wrote. “Great idea! Nice, clean images with a strong impact. Well done.”

A video created by GRCC’s Media Technologies team featuring alum York Tardy earned a Bronze Medallion in the Video-Long Form category. Tardy, a project superintendent for Christman Company, spoke about his GRCC education prepared him for his career and overseeing the transformation of the former JCPenney in the Shops at Westshore into the new GRCC Lakeshore Campus.

The Media Technologies team also collaborated on a series of radio ads calling for people to attend last year’s virtual open houses. The series earned a Bronze Medallion in the Radio Advertisement category.