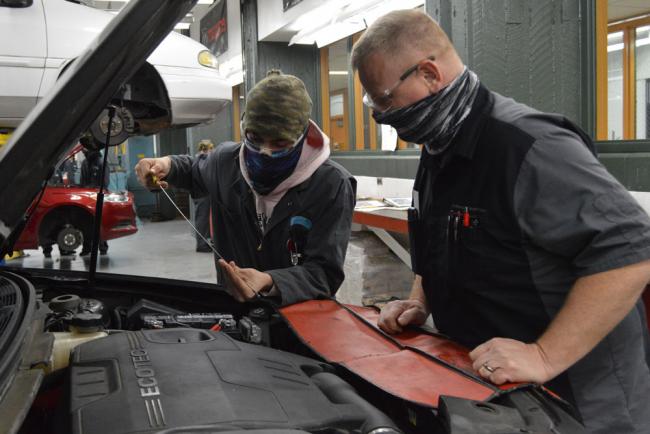 “I’ve always liked cars and just working on them is really fun … I like the hands-on more than doing the computer work,” Wooten said as he replaced coolant in a 2002 Ford Ranger in the classroom/garage that houses the Automotive Technology Program at Grand Rapids Community College. Wooten is working on his associate degree in automotive technology.

A 2020 Sparta High School graduate, Wooten began at GRCC with credits from three classes already under his toolbelt from courses he completed as a junior and senior: on brakes, steering and suspension, and an introductory course in the Kent Career Tech Center’s Automotive Technology Program.

Now he’s taking classes in heating, ventilation and air conditioning and drivability diagnostics at GRCC, while working part time at an independent repair facility as a mechanic. He hopes to eventually earn a bachelor’s degree in automotive engineering from Ferris State University.

The proximity and partnerships between the GRCC and Tech Center programs and local dealerships are helping him make seamless transitions through his education.

A Demand for Skilled Mechanics

Wooten has reason to feel secure about job prospects. While the industry is ever-evolving in terms of technology and efficiency, the foundations of automotive repair will remain the same, say his instructors. Service technicians will still be needed to perform basic maintenance and repair tasks, such as replacing brake pads and changing oil. Those skills right now are in big demand.

“There’s fairly consistently a shortage of qualified technicians in the field,” said Ben Smith, assistant professor in the GRCC Automotive Technology program. With about 70 people enrolled this year, Smith hopes to build numbers back up to about 100.

“I don’t think people always think of it as a career choice,” he said. “You do pretty high-tech stuff; it’s not just the grunt work you think of from a mechanic. It’s a challenging career.”

Many students are already working in body shops. “Most students, if they really want a job, there’s no doubt we can get them a job,” said Nathan Vannest, an instructor in the Tech Center program, where many students earn certifications for jobs and continue training at GRCC.

Instructors Chris Yetzke and Mike Pekrul teach in both the GRCC and Tech Center programs.

“The last time I checked, the average age of a technician in the U.S. was, I think, 53, so there’s a lot of people retiring,” Yetzke said.

‘Unlimited Opportunities for Pay and Growth’

GRCC partners with manufacturers to align curriculum with needed training, such as with Fiat Chrysler for the Mopar Career Automotive Program. In 2020, Mopar cited an increase in demand for 45,000 automotive technician jobs by 2026.

“There is an unbelievable demand for skilled trades people in general. The automotive industry specifically is in dire need of service technicians,” Snyder said.

“The programs at Kent ISD and GRCC do a great job of preparing students for an in-demand career with unlimited opportunities for growth and pay. A good technician can write their own ticket and live anywhere in the country they choose within reason. Top technicians are making anywhere from $80,000 to over $100,000 per year. The reality is that pay is not based upon degrees but upon skill set, certifications and work ethic.”

Snyder cited a major reason for the demand being so great is that for many years high-school students have been pushed toward pursuing a bachelor’s degree regardless of outcomes.

“There has been an idea/thought process that in order to be successful in life you had to have a four-year degree. High schools over the past 25 years have drastically reduced vocational education, cutting back or eliminating programs like metal shop, welding and automotive.”

But that shortfall has created opportunities for those with an interest in pursuing a hands-on career, he said.

“When the demand for your skill set is high and supply is low, that’s a winning combination for a person to have a great career outlook.”

The Tech Center and GRCC helps students build foundational skills so they can, in turn, build on those certifications over their careers, Yetzke said.

“The technology changes, but the basics really don’t here; it’s more basic knowledge of the systems,” he said. “In this business you never quit learning.”

This story was reported and photographed by Erin Albanese of the Kent School News Network.