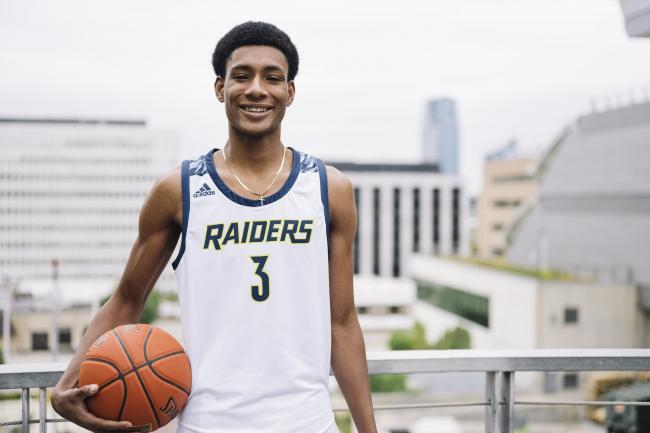 GRCC, now 3-3 on the season, trimmed a Calvin lead to 46-38 at the half after Justus Clark sank a half-court shot as time expired.  The Raiders kept clawing their way back in the game, and a Rico Wade three-pointer with 12:15 on the clock gave the team their first lead in nearly 20 minutes of action.

GRCC maintained the lead until 15 seconds to go in regulation, when Logan Van Essen knocked in a triple to knot it up at 86.  He went on to score a game-high 41 points.

In the first overtime period, Andrew Moore made one of two from the charity stripe to make it 92-89 with 20 seconds on the clock, but the Knights would hit another game-tying three-pointer, this time by Gabe Dirksen (20 points,10 rebounds) with just two seconds left.

In double-overtime, GRCC’s Brockton Kohler was fouled with 21 seconds left, and he would tie the ball game up at 104. But the Knights weren't done. On the inbounds, Kohler deflected the ball, but it landed right in the hands of Van Essen would hit the game-winning jumper just before time expired.

"Tough to lose a second double-overtime when it felt like we had a good chance at it in regulation and both overtimes," head coach Joe Fox said. "We fought until the end, but little errors in execution along the way add up. Our assistant coach, DeQuaveon Stuckey, told the team in the locker room, ‘It’s not a loss, it’s a lesson,’and I thought that rang true. Excited for a little break to get healthy, then a fun road stretch in a few weeks."

Moore, a top-five scorer in the conference, led GRCC with 29 points.  Freshman Matthew Richards did a little of everything, including back-to-back nights with fast break steals and lay-ups. He was eight of nine from the floor, finishing with 18 points, 15 rebounds, two assists, two blocks and three steals.

GRCC won't be back on its home court until January.  The team’s next game is Nov. 29 at Delta College, followed by three more road games before the holiday break.