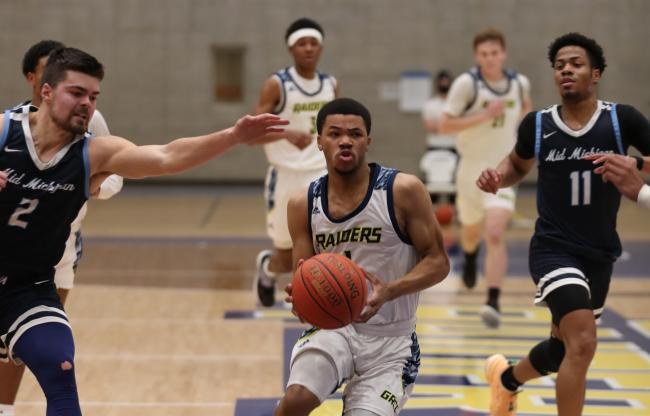 The women’s team also was defeated by a strong Jackson team, losing 70-50.

The men’s team played into overtime for the fourth time this season. GRCC started strong, building a 20-point lead. But the Jets soared back to make it a six-point game at the half.

Dayton Cole's three-point play with 3:56 remaining in regulation gave Jackson its first lead of the game. With just under a minute to go, Cole would hit another basket, tying the game at 86. GRCC had a chance to win it, but Ryel Daye's three-point shot was short and Diego Ledsema's tip-in attempt missed as the buzzer sounded.

In the beginning of the first overtime, Jackson’s Alex Daniels took advantage of a double-technical foul called on GRCC, hitting all six of his free throw attempts to put his team up 92-86. But it didn't take the Raiders long tie score at 93. Three more free throws by Daniel seemed to put the Jets up for good, 103-95 with under a minute to go.

But GRCC forced another overtime after a three-point basket by Daye, a sophomore from Kentwood, with less than five seconds to go.

In double overtime, GRCC was the Raiders up two, but Jackson’s Gabe Damey would hit a game-tying shot just before the buzzer. Damey had a triple-double on the night, with 22 points, 14 rebounds and 12 assists.

Down three in triple-overtime, Daye had a look at forcing another extra session, but was unable to sink the basket and the Jets held on to win.

Six different Raiders scored in double-digits, while Daye, with 24 points and 10 rebounds, and Danyel Bibbs, with 11 points and 11 assists, each had a double-double.

Moore, of Grand Rapids, shot 50% from the floor and picked up 6 rebounds and four steals. Ledsema, of Wyoming, playing his first game for the Raiders, sparked his squad with 16 points, seven rebounds and five steals.

The women's team, now 5-7 on the season, stayed close to Jackson through the first quarter, but the Jets would outscore the short-handed Raiders in each of the final three quarters.  Jackson has seven wins and three losses.

GRCC, playing without two starters and a key role player, managed to keep within 10 points for most of the game. But Jackson pulled away late in the fourth quarter to win.

Sally Merrill, a freshman from Allegan, added seven boards, playing in all 40 minutes. Freshman Alysia Wesley of Grand Rapids connected on for of seven throws from the field to score 10 points off the bench.

Marlene Bussler, a freshman from Battle Creek, nearly had a double-double with eight points and team-high nine rebounds.

Both teams will return home on Jan. 15 to take on Lansing Community College, with the women's game tipping off first at 1:30 p.m. Fans who bring in three or more canned goods to support GRCC's food pantry will be admitted free.  General admission is $3 per person.