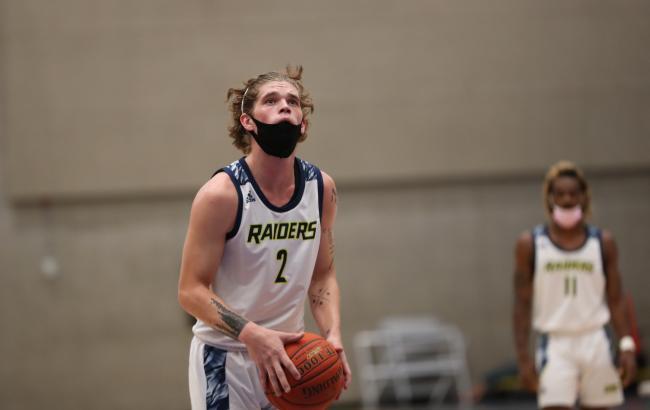 The women’s team, now 5-6 on the season, led wire-to-wire and picked up its first conference win in a 61-48 victory over the Lakers.

GRCC connected on four of its five total three-point baskets in the first quarter, jumping out to a 19-7 lead. Mid Michigan gained momentum in the third quarter, but GRCC responded to hold the visitors to just seven points in the final period to pick up the 13-point win.

Merrill, a freshman from Allegan, and Bussler, a freshman from Battle Creek, each scored 16 points, including making all of the Raiders' three-point baskets. Merrill added 10 rebounds, giving her a double-double while Bussler fell just one board short of one.

Karissa Ferry, starting for the first time this season, scored eight points and grabbed a game-high 12 rebounds. The two-sport athlete from Chesaning also is a member of the volleyball team.

The men's game was closer, with six lead changes, including a few late in the game.

Mid Michigan stormed back from a 14-point second half deficit to take the lead with 1:15 remaining, 77-75. GRCC hit back-to-back baskets to give the team the lead with 41 seconds left. That was enough time for the Lakers to pull closer.

GRCC point guard Danyel Bibbs, playing in his first game of the year, scored on a layup to put the Raiders up with under 17 seconds left. Pruitt missed a jumper with under seven seconds left and Kohler would make four of his 10 free throws to secure the 85-82 victory.

Kohler, from Greenville, connected on all 10 of his free throws, and also made four three pointers.  He added six rebounds and three assists.

Sophomore Ryel Daye, from Kentwood, also playing in his first game of the season, had the lone double-double for the Raiders, scoring 15 rebounds and grabbing 11 boards.