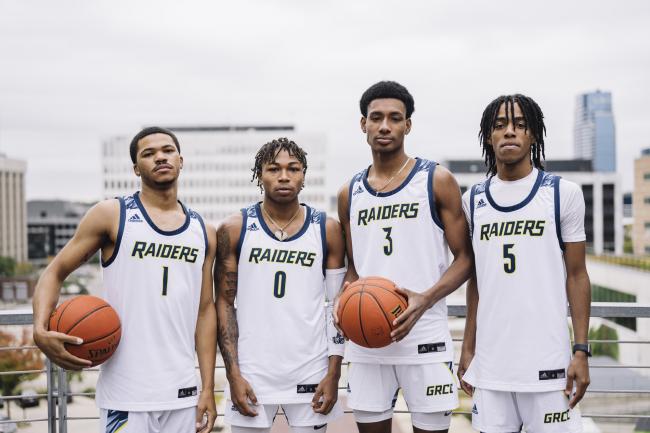 Nov. 12, 2021, LANSING, Mich. -- Grand Rapids Community College men's basketball team held on for a seven-point victory in its first road contest of the season, but the women’s team fell to Illinois Central College, one of the top teams in the nation.

The Raiders, 2-2 on the season, led by as many 19 points just before the end of the first half. But the Crusaders scored the final four points of the half and the first seven points of the second half, making it just an eight-point game. GRCC then went on an 11-0 run of its own to give the team a 19-point lead again with 10:47 remaining.

But back came the Crusaders.

Jalen Johnson, with a game-high 20 points, scored with 1:14 left in the game, making it just a two-point game. Then GRCC scored the final five points of the game to hold on for the victory.

Head coach Joe Fox was proud of the way his team battled.

"For the first road game for a young team, we were ready to play from the start and our effort level stayed high," Fox said. "We have room to grow, and I'm excited to see how we respond next week."

Six Raiders reached double-figures. Andrew Moore scored 18 points on 7 of 16 from the field.  Rico Wade and Matthew Richards each had 13 points with Richards adding 11 rebounds.  Justus Clark had another double-double as well with 11 points and 11 rebounds. Jovante Jones scored 10 points and Brockton Kohler had 11 rebounds.

The Cougars, ranked No.4 in the NJCAA Division II poll, jumped out to a 21-5 lead after the first quarter and never looked back. GRCC trimmed the 27-point halftime deficit to 18 late in the third quarter, but was unable to get closer.

Marlene Bussler was lone Raider in double figures with 12 points, and adding a team-best six assists.  Grace Lodes chipped in with nine points as a total of 11 players scored for the Raiders.

The Raiders hit the hardwood again at noon Central Standard Time on Nov. 13 as they take on Parkland College, ranked No. 6 in the nation.