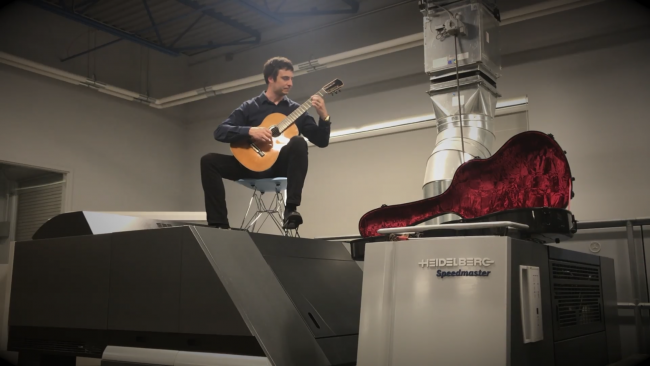 Nov. 9, 2021, GRAND RAPIDS, Mich., -- A print shop, a jewelry store, and the zoo aren’t typical places a classical guitarist might be found. But Grand Rapids Community College music instructor Jonathan Marshall says the pandemic brought dramatic changes to the arts – including how and where people can perform.

Musicians opted for virtual performances during COVID-19. For his upcoming “Familiar Places” virtual concert, Marshall decided to bring his guitar to many places people go to for work or pleasure – but not necessarily to enjoy a concert.

“The idea for this event came to me in a dream, but I believe that the virtual performance world is in its infancy,” he said. “COVID and its restrictions have spurred concertizers and musicians to come up with innovative ideas for the virtual platform. There are many untapped performance and marketing ideas that have yet to be discovered.”

The performance will debut online at 7 p.m. Thursday, Nov. 11, and will be available afterward. Viewing is free, although people are welcome to donate to support GRCC’s International Guitar Series. Access is through a link here.

Marshall is the Guitar Series director, and he already has offered a number of virtual classical guitar performances in more traditional settings. Innovative virtual performances could allow more people to experience the concerts. No longer limited to people in attendance, the performances could be attended virtually by anyone, anywhere.

“The purpose of the International Guitar Series was to bring excellent guitar performances to our community,” he said. “But we now not only have a local following, but a national and international one as well, due to the virtual option. The series plans to move to live performances in the winter of 2022, but the virtual option will remain available to our external following.”

Marshall said he selected locations for “Familiar Places” based on connections or just because he thought they might be interesting.

The program will showcase composers of the Renaissance, Baroque, Neoclassical, and 20th-century eras, and includes three pieces he composed.