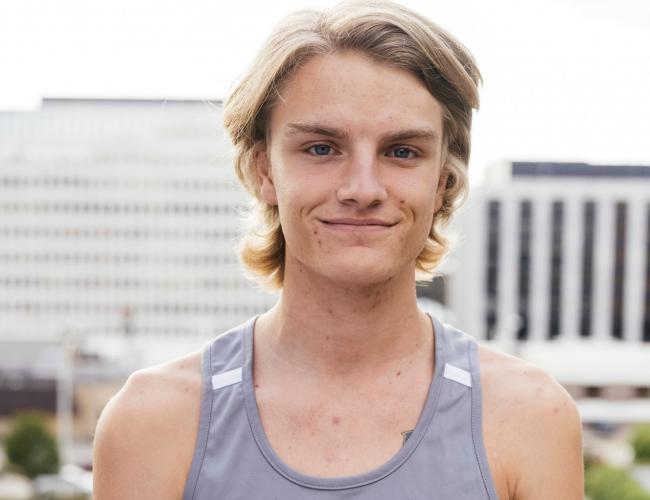 Clark also was named MCCAA Conference Runner of the Week, joined by Kaylee Scott of the GRCC women’s team.

Clark, a freshman, earned national honors from the U.S. Track and Field and Cross Country Coaches Association after winning the MCCAA-Region XII Championships on Saturday in a time of 25:56.5 for the 8,000 meter course.

“I’m really happy to have been selected as the NJCAA D2 National Runner of the Week<” Clark said. “I think the season has gone really well so far and I’m really looking forward to Nationals. I attribute my success this season to supportive friends and family and an awesome team that really pushes me to be the best that I can be.”

Clark is from Carson City, a community east of Greenville that also is the hometown of men’s team coach Garrett Lacy – and he even broke Lacy’s school record in the 3200-meter race during his senior year.

“I’m very happy for Coleman to have received this honor,” Lacy said. “He’s worked so hard all season long, and has led us as our No. 1 runner in every single competition thus far. He’s been as much a leader in practice as he has been in competition as well. Breaking the 26:00 barrier for 8k last meet for the first time at the MCCAA/NJCAA Region 12 championships is no small feat, and he is just scratching the surface at what he is capable of.”

Clark was named to the earned All-MCCAA, All-Region, freshman of the year and MCCAA Runner of the Year honors while helping the Raiders finish second. He is the first GRCC student-athlete awarded National Athlete of the Week honors for NJCAA Division II schools.

Josh Kipkoech, from Kenya, was named All-Region and All-MCCAA for the second consecutive year after running a 25:58.9. The 2020 NJCAA All-American finished in second place at Saturday's championship races.

Scott, a freshman from Grandville, finished fourth in the MCCAA/Region XII Women's Cross Country Championships to help the Raiders to a second place finish. She finished the 5,000-meter course in a time of 19:47.1 to earn both All-MCCAA and All-Region XII honors.

GRCC will compete in the National Championships in Richmond, Va. on Saturday, Nov. 13.