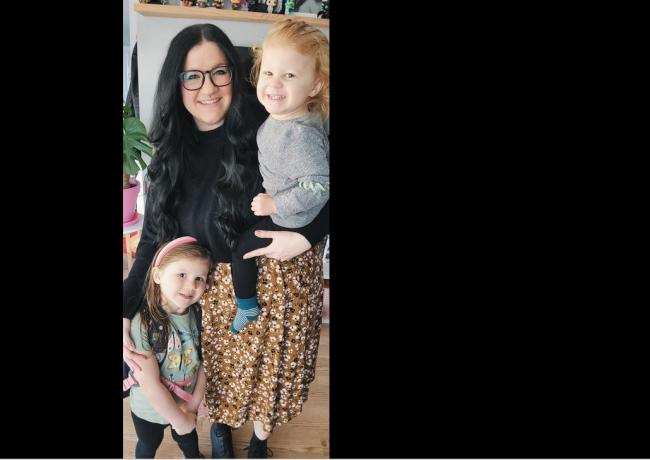 After graduating from Cedar Springs High School in the spring of 2009, she decided to live at home and become a fulltime student at GRCC that fall.

“I was a pretty typical high school student,” she said. “Involved in some plays, decent grades. And I was of that generation where we were told you had to go to college after high school. So that’s what I did.”

Part of her Cedar Springs experience included a TV production class, so she figured she’d study communications in college and maybe end up in a TV production job of some sort after graduation.

“I really didn’t know what I wanted to do,” she said.

Her first semester saw her taking 12 credit hours but without some of the drive and motivation she’d had in high school. She soon realized she had probably taken on too much.

“I passed maybe two of the four courses,” she said. “So, I was on academic probation, and instead of coming back, I decided to take some time off.”

She returned again for the winter semester in 2011. And again, things did not go well. This time she ended up on academic suspension, so she decided to enter the workforce on a fulltime basis and began a series of jobs – first some retail positions and eventually administrative assistant type posts at a law firm and a hospital.

Soon enough she began to feel the nudges to go back to school and get a degree. A career in human resources – based on experiences she had had with both good HR people and bad HR people – intrigued her.

But she was married, had a couple of kids, money was tight, and she tried to resist those nudges.

Until she heard about the Futures for Frontliners scholarship program. The state program covers the cost of in-district tuition for people who worked in essential fields during the state's COVID-19 shutdown.  While the application period is closed for Futures for Frontliners, many residents age 25 and above are eligible to attend GRCC with in-district tuition covered through the Michigan Reconnect program.

Frontliners was exactly what Duron needed to turn the nudges into a push.

“I had two little girls,” she said. “And I remember I would often think about how they looked up to me and what I would be showing them if I went back (to college). That I’d be showing them it’s never too late. When Governor Whitmer announced the program (Futures for Frontliners), I thought ‘you’d be pretty dumb to not take advantage of this.’”

And take advantage she has.

“The program changed my whole life,” she said.

Stephanie re-enrolled at GRCC and started her first semester in 2021. She hasn’t stopped since, including summer school classes both last summer and this summer!

“It was tricky to adjust to being back as a college student in my 30s,” she said. “I started slow, only taking six credits a semester since I was still working part-time and taking care of kids.”

But Stephanie soon found her rhythm and soon was getting all As and becoming a regular on the Presidents List.

“I also got myself off the academic probation that followed me from 2009,” she said with a laugh.

She’s now approaching the finish line on an associate’s degree in Business Management and so grateful to GRCC that she said she’d love to find a job at the college after graduation and pay it forward to the next generation of students.