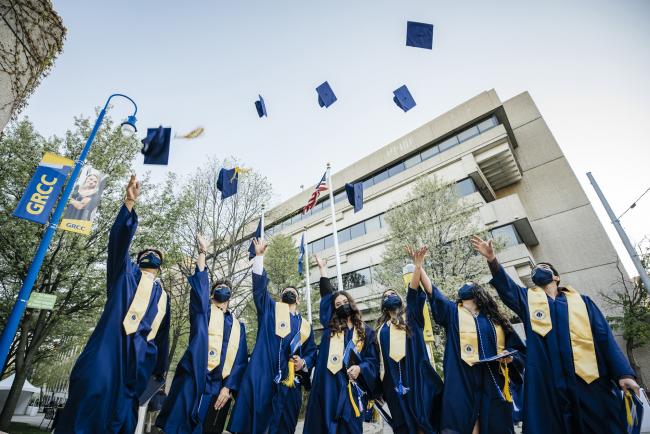 “We are incredibly proud of these students, and we’re pleased that the Coca-Cola Scholars Foundation and Phi Theta Kappa recognized their hard work and leadership,” said Tina Hoxie, GRCC’s associate provost and dean of Student Affairs. “Their goals and experiences are very different, but they all realized that GRCC is an affordable, accessible college that challenges high-achievers.”

Cetlinski received $1,500 as a 2021 Coca-Cola Academic Team Gold Scholar. Almost $200,000 in scholarships are awarded annually to 50 Gold, 50 Silver and 50 Bronze scholars. Recipients are selected for their academic achievement, leadership and community service.

Cetlinski, who worked in construction and metal fabrication for 15 years before enrolling at GRCC, received his Associate of Arts this spring and plans to attend Grand Valley State University this fall. After he earns his bachelor’s degree, he plans to apply to medical school in pursuit of a career as a neurosurgeon. In addition to his classwork, Cetlinski also works as director of donor relations for the Alano Club of Kent County, an alcoholism treatment program. He has also been working on a memoir about family dynamics, psychology and addiction that he hopes to publish this year.

LeQuia received a $1,250 scholarship as a 2021 New Century Workforce Scholar. More than 2,000 students were nominated by 1,200 colleges nationwide; only one student from each state received the honor.

LeQuia is enrolled in the Dental Hygiene program and hopes to use those skills to work in private practice as well as on mission trips. She works with youth ministries at St. Pius X Catholic Church and says she would like to return to GRCC someday as a faculty member.

“We thank the Coca-Cola Scholars Foundation for recognizing these student leaders and for investing in their futures,” said Lynn Tincher-Ladner, president and CEO of Phi Theta Kappa. “Scholarships like these are integral to the success of these students in reaching their educational and career goals.”

Cetlinski and LeQuia were also named to the All-Michigan Academic Team for the Phi Theta Kappa Honor Society, along with GRCC students Michael Kelley and Philder Okech. Team members are nominated by their colleges based on their academic achievements, community service and leadership accomplishments.

Kelley is pursuing an associate degree in Mechanical Design and plans to eventually become a freelance designer. He donates both his time and resources to helping friends who are struggling, including one in prison. He successfully juggles his classes with his job as a production supervisor.

Okech, who is originally from Kenya, started at GRCC during the COVID-19 pandemic. He plans to earn an associate degree in Nursing and then pursue a bachelor’s degree at GVSU. Okech, who volunteers with his church, says he would like to become a nurse educator and provide services to rural areas.

“These impressive students showcase the bright talent that we have at Michigan’s community colleges, and I can’t wait to see them continue to grow as part of the PTK All-Michigan Academic Team,” said MCCA President Michael Hansen.