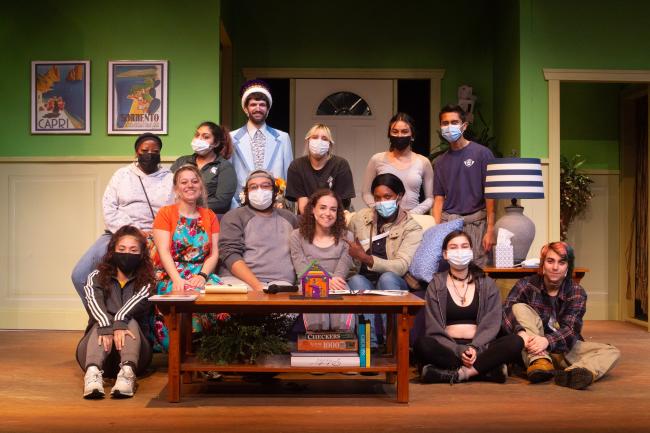 The GRCC Players were scheduled to perform Kim Rosenstock’s comedy in March 2020, but COVID-19 canceled that plan. Hard work by the original cast of students and director Tom Kaechele will be on display when audiences finally see “Tigers Be Still” at 8 p.m. Oct. 14 through 16 at GRCC’s Spectrum Theater, 160 Fountain St. NE.

Cast members say waiting to find out when they were going to perform was difficult, but restarting rehearsals after the pandemic was a comfortable process.

“For the longest time, it was a waiting game – to see if we could bring it back,” said Eliana Hilliker, who plays Sherry Wickman. “But once we got the ‘go’ to return to ‘Tigers Be Still,’ our entire cast and crew were so excited! Our first couple of rehearsals were just getting comfortable with the script and the characters all over again. But the nice thing was it started coming back naturally for us – a happy reunion with each other and our characters!”

“When Tom, the director, reached out to the cast, we all jumped to start the show,” said Sky Rodriguez, who plays Zach. “It was an easy comeback.”

Trent Woodman, who plays the role of Joseph, believes the unexpected hiatus has made the performances better.

“We’ve all grown as actors and people, and, honestly, some of our best or funniest moments have come after being away for so long,” said Woodman, who plans to major in communications.

“Tigers Be Still” centers on Sherry Wickman, who has recently earned a master’s degree in art therapy but has had to move back home because she still hasn’t found a job. This dysfunctional comedy follows her personal and professional challenges – which do include an escaped tiger! This play contains adult language and content. In addition to Hilliker, Rodriguez and Woodman, the cast features Yesenia Cotto as Grace."

Rodriguez, who plans to transfer to Kendall College of Art and Design’s medical illustration program, hopes the play inspires audience members to consider ways they can work better with their families and friends.

“Because when you watch these characters all interact with one another, you can tell that there are definitely different ways things could have been handled,” Rodriguez said. “Learning and listening to those you love and care about will help a lot. And never forget that you yourself also need to be taken care of! Mental health is still new in media and being properly addressed, so this is something that can really open a lot of people’s eyes.”

Hilliker likes the play’s theme of perseverance: “That’s something I love about Sherry – even when nothing makes sense and it seems impossible to keep her head up, she always finds a way to keep believing in those around her as well as herself.”

Photos by Dave Kagan of Sensitography.