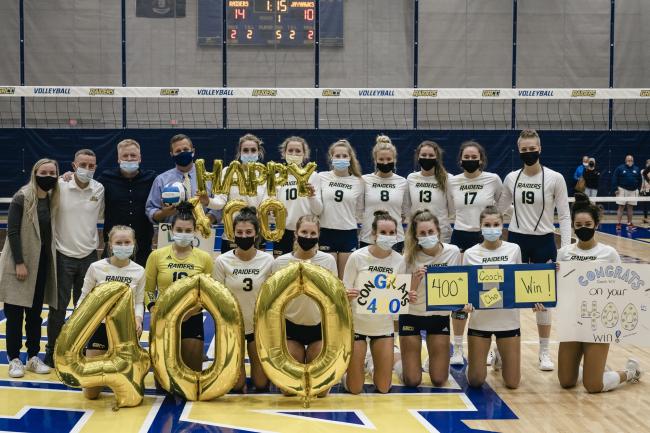 The Raiders, ranked No. 7 in the nation, ran their victory streak to 12 matches and remain in first place in the Michigan Community College Athletic Association’s Western Conference.

Alumni and families swarmed onto the court after the deciding fifth set, celebrating the milestone win with balloons and signs. That support, Will said, was more important to him than the victory.

“I think after 15 years we’ve been able to build something special – something people want to come back to,” he said. “It’s really, really awesome to see alumni come back, and so many families here. That’s what it’s about. At the end of the day, the wins are great. But having this culture of family and togetherness -- that’s what’s most important.”

GRCC has become a national volleyball powerhouse during Will’s coaching tenure, which includes a national championship in 2012, 10 regional championships and nine conference crowns. His overall record is 400-103 -- an impressive .795 winning percentage.

“I want to share huge congratulations to coach Will on 400 victories,” said Dr. Christopher J. Parker, president and CEO of the National Junior College Athletic Association. “A milestone that he should be very proud of and I certainly appreciate all of his dedicated service to the college, the student athletes and the association.”

Will also had 10 student-athletes earn National Junior College Athletic Association All-American honors, including Kendra DeJonge, who earned the title in 2017 and 2018.

“As my all-time favorite coach, Chip always expected the best from me as a player and person, and helped me reach some of my greatest accomplishments,” she said. “He coached me at many ages in my life and had a huge impact on my life outside of just volleyball. I will always cherish the time I spent playing at GRCC. He made it so much fun and it was always clear that volleyball was so much more than just a game.”

Kaitlyn Wolters Bergman, was an All-American in 2012 as a member of the team that won the national championship. She said Will “truly cares” about each of his players.

“He gave me a chance and experiences that offered me the ability to further my career,” she said. “He made me believe in my abilities both on and off the court. I grew so much as a person in just two years.”

Will was named NJCAA National Coach of the Year in 2012, and has six district, conference and MCCAA coach of the year titles.

GRCC Athletic Director Lauren Ferullo said she asked Will what made his program so successful when she met him for the first time this summer.

"I Couldn't be prouder of how our players persevered after dropping the first set to come back to win the match," assistant coach Amanda Glaza said. “It just shows the potential that this team has. We played with heart and it showed, especially being down three in the final set and coming back to win.”

Audrey Torres also had the second most kills of her collegiate career with 16 kills while hitting .261.  Eliza Thelen had 7 kills and hit a match high .500. Four Raiders had double-digits in Digs, led by Kara Hecht with 17. Hecht added 8 kills and a block to her stat line.

The Raiders will look to remain unbeaten in the conference as they travel to Lake Michigan College on Oct. 12 at 6:30 p.m.