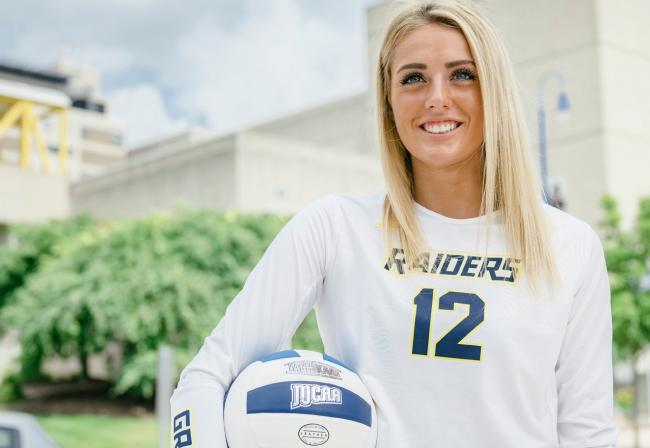 The team this season enjoyed an 18-match winning streak spanning 66 days, a 10th conference title, finishing 14-0 in Western Conference play, and an MCCAA Championship -- the team’s fifth in the last six years. The team was ranked No. 6 in the nation at the end of the season.

“GRCC volleyball has a winning tradition, and we’re proud of the effort our student-athletes put in on the court and in the classroom,” Athletic Director Lauren Ferullo said. “Our team was one of the best in the nation. The individual awards are special, but reflect the success of the entire team and the hard work of the coaches.”

Holesinger, a sophomore from Rockford, was named All-MCCAA, First Team All-Conference and was a member of the All-Tournament team at last weekend’s NJCAA Region XII Great Lakes B Tournament. She was first on the team in kills with 346, blocks with 73 and hitting percentage, .322.

Torres, a freshman from Caledonia, finished third in Player of the Year voting. She was named All-MCCAA, First Team All-Conference, and a member of the All-Tournament team and the Western Conference All-Freshman team.

Torres was the only Raider to start in all 31 matches while compiling up a team-high 50 aces.  She was also second on the team in points with 373, second with 302 kills and third with 297 digs.

Ola Nowak, a freshman from Grandville, was named First Team All-Conference and also a member of the six-player All-Freshman team.  She played in all 31 matches and all 111 sets. She led the team with 396 digs averaging 3.57 per set.  She was also 2nd in assists with 412 and 3rd with 38 service aces.

Kylie Oberlin and Shannon Russell were both named Second Team All-Conference.  Oberlin, a sophomore middle blocker from Fruitport, was third on the team with 160 kills, 67 blocks and 197.5 points. Russell, a freshman setter from Grand Rapids, led the team in assists with 740, was second in service aces with 44 and fifth on the team in digs with 174.

Earning All-Conference honorable mention was Kara Hecht of Zeeland, Karissa Ferry, of Chesaning, and Eliza Thelen, of Grand Rapids. Hecht totaled 125 kills, 175 digs and 27 aces. Ferry played in all 31 matches and totaled 136 kills and 70 blocks. Thelen hit .250 and finished with 82 kills and 34 blocks.