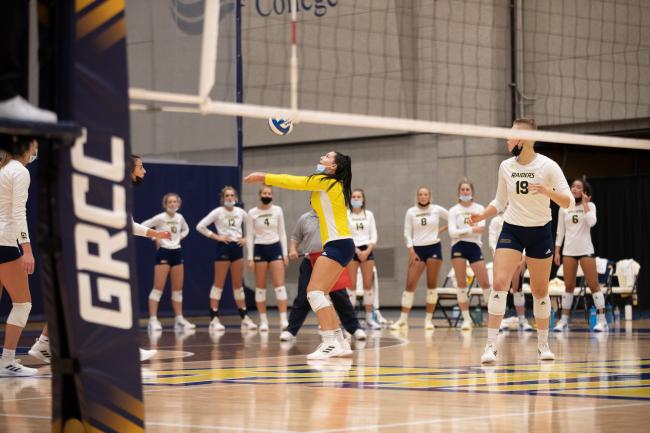 The Raiders, ranked No. 10 in NJCAA’s Division II, got a match-high 15 kills from two-time MCCAA Western Conference player of the week Annie Holesinger to defeat Owens 25-18, 25-13, 25-23 – the team’s third-straight sweep.

Owens, from Perrysburg, Ohio, are ranked No. 2 in the nation in the National Junior College Athletic Association’s Division III.

In the win, Holesinger reached the 200-kill mark for the season and surpassed 700 for her career in a Raider uniform.  In her last five matches, the third-year sophomore has had at least 12 kills while hitting over .400. She currently sits at 20th in the nation in kills per set and 17th in hitting percentage.

Assistant coach Amanda Glaza has been very pleased with Holesinger's performance this year.

"We are extremely happy that Annie came back to play for us a third year," Glaza said.  "She worked very hard over the off season to become the All-American player we knew she could be, and it sure has showed. Her 700 kills ranked her fifth overall in Raider volleyball history. And the pace that she's on, she could be well over 800 before her Raider career ends."

All 15 GRCC players made it to the court and 12 of them scored at least one point.  Freshman Audrey Torres was the lone player with a double-double, with 11 kills and 11 digs.  Torres is team’s second-leading point scorer with 143 kills, 20 aces and 16 blocks.

The Raiders will play two matches on Sunday, taking on No. 5-ranked Terra State Community College at noon and conclude tournament play against Macomb Community College at 2 p.m. Fans will not be allowed to attend, but all the matches will be live streamed at on the GRCC Athletics YouTube page.