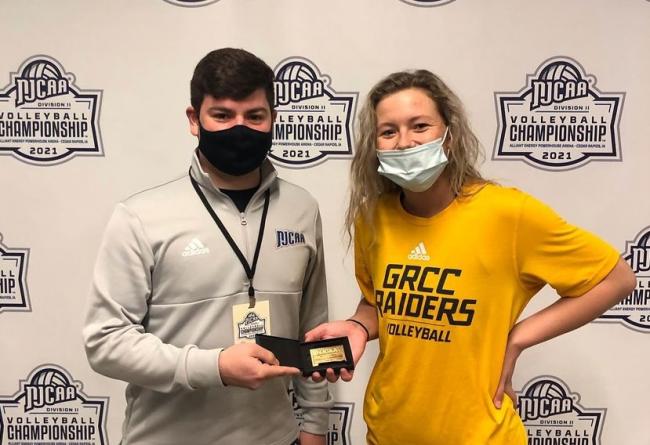 April 15, 2021, GRAND RAPIDS, Mich. – The Grand Rapids Community College volleyball team finished No. 10 in the nation, with a player named to the All- Tournament Team at the NJCAA D2 National Tournament on Thursday.

The Raiders fell to Terra State Community College of Ohio in four sets in the consolation round, but finished in the top 10 of the National Junior College Athletic Association D2 event in Cedar Rapids, Iowa.

Kylie Oberlin was named to the All-Tournament team for her outstanding performance. Oberlin, a sophomore from Fruitport, led the Raiders in kills with 44, and picked up 25 digs, 6 blocks and 4 aces.

GRCC didn’t expect to participate in the tournament, getting the call a week after players were told their season ended. Muskegon Community College, undefeated during the season, withdrew because of illness and GRCC, as the conference runner up, took MCC’s place.

The Raiders dropped the tournament’s opening match, then won twice on Wednesday, including a stunning comeback against Potomac State College of West Virginia.

The trip to the National Tournament was the 11th in 15 years for Coach Chip Will.