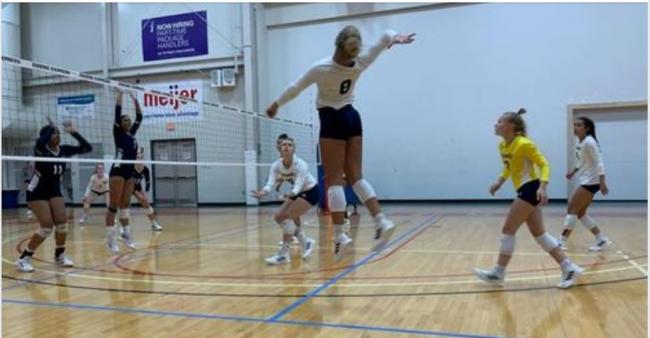 The No. 11 ranked Raiders opened the second day of the event against Parkland College of Champaign, Ill., ranked No. 2 in the nation. GRCC jumped on the Cobras early in the opening set, leading by as many as five points twice. But despite four set points for GRCC, Parkland responded with a 6-0 run to win the set 26-24. The Cobras proved too tough for the Raiders in sets two and three, winning 25-10 and 25-19.

Annie Holesinger, with eight kills and four blocks, and Morgan Fugate, with six kills and two blocks, provided nearly half the Raiders’ offense in the match.

Defensively, Audrey Torres had a season-high 17 digs while Audrey Gower added 11 digs of her own.

The final game of the tournament was a rematch of the ninth-place match of the 2021 NJCAA National Tournament, with GRCC facing Terra State Community College of Fremont, Ohio. The Titans again got the best of the Raiders, three sets to one, winning 25-16, 21-25, 25-19, and 25-22.

Torres was the offensive spark against Terra State, finishing with a career-high 17 kills while adding 11 digs. It was her second double-double of the tournament after a 10-kill, 12-dig performance against No. 12 Catawba Valley on Friday.  Freshman setter Ola Nowak led the defense with 17 digs and also the team with 32 assists.  She and Torres each had two of the Raiders five total service aces.

Statistical Leaders for the tournament:

Conference play begins for the Raiders Thursday, Sept. 2.  The team will battle Glen Oaks Community College in Hunsberger Arena at 6:30 p.m. Admission will be $5, with season passes will also be available. Admission is free for GRCC students with their RaiderCard.