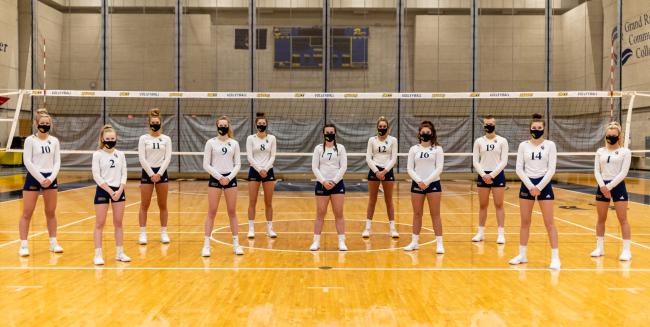 April 9, 2021, GRAND RAPIDS, Mich. – A week ago, it seemed the Grand Rapids Community College volleyball season was over after the team fell to undefeated Muskegon Community College in the finals of the regional tournament.

But today, the Raiders are reassembling and planning to compete in the National Junior College Athletic Association D2 National Tournament. Illness has forced Muskegon to withdraw, and GRCC will instead head to Cedar Rapids, Iowa for an opening round game on Tuesday.

GRCC Interim Athletic Director David Selmon said he understands the Muskegon student-athletes must be devastated by the news.

“Muskegon had a tremendous year, and we’re sorry for those student-athletes,” Selmon said. “Our players also worked very hard and put together a solid season. The Raiders will proudly represent their rivals and the rest of the state as it competes in the tournament.”

The Raiders posted an 8-5 record this season, with four of the five losses coming against Muskegon. GRCC played Jayhawks in the District XII finals after opponents in two opening rounds withdrew due to illness.

Volleyball is typically a fall sport, but the NJCAA delayed and shortened the season due to the pandemic. The college is closely following safety guidelines from the NJCAA and Michigan Community College Athletic Association, including requiring face coverings, social distancing where possible and limiting spectators in the arena during games.

GRCC has a partnership with Ferris State University’s College of Pharmacy to test students, coaches and training staff for COVID three times a week.

Coach Chip Will is bringing players back together for practices during the weekend before the team heads to Iowa.  Will is in his 15th year as GRCC volleyball coach, and has brought a team to the national tournament 11 times. The team finished fifth in the nation in last year’s tournament.