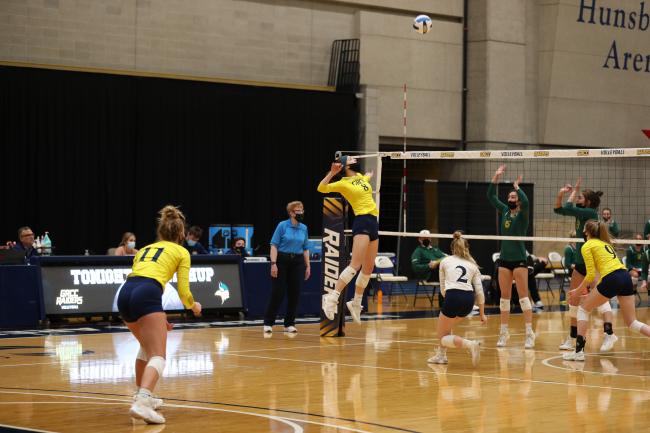 The Volleyball team’s trip to the nationals was unexpected. The team thought its season was over after losing to Muskegon Community College in the regional finals, only to get the call on Friday that Muskegon withdrew due to health issues.

The Raiders scrambled to reassemble and practice before boarding the bus for Iowa on Sunday afternoon.

Filling undefeated Muskegon’s ninth seed in the tournament’s bracket, the Raiders faced eighth seed Gulf Coast State in the first round. The Commodores swept the series 25-10, 25-16 and 25-23 to advance.

The Raiders will play again in the consolation bracket against No. 16 seed Potomac State on Wednesday.

Sophomore Annie Holesinger led the way for the Raiders with 10 kills and three blocks. Kylie Oberlin with six kills.

The softball team dropped its first game against Lake Michigan 17-2, then struggled in the second as well, losing 12-2.

Haley VanHuis three-for-four with a n RBI, and Krin Beach had a hit and an RBI.

The Raiders are on the road Wednesday for a doubleheader against Mid Michigan College.