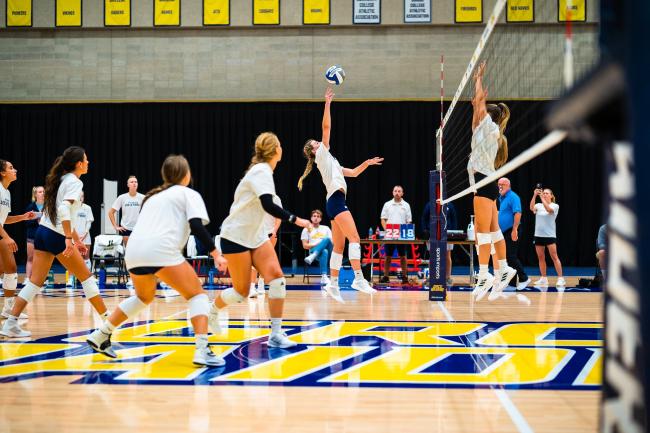 Sept. 29, 2022, MUSKEGON, Mich. -- The Grand Rapids Community College volleyball team stayed perfect in conference play, and won its 10th match in a row with a 3-1 victory over Muskegon Community College on Thursday.

"The team came in with a positive attitude and carried that positive attitude throughout the whole game," freshman Lexi Heavner said. “We didn't let the crowd bother us and we played the game we know how to play. Today proved that we are capable of greatness this season."

Ferry had five blocks and Thelen had eight, including two solo blocks. Gower had 32 digs, including 12 in the third set.

One of the biggest keys to the victory was the comeback by GRCC in the third set.  With Muskegon up 17-11, the team went on a 10-0 run, all with Gower behind the service line, and wound up stealing the set 25-21.

Audrey Torres led the team in kills with 15 including seven in the final set. Kara Hecht added 13 kills and Ferry finished with 10. Shannon Russell finished with the lone double-double on the team with 40 assists and 14 digs.

GRCC, now 10-2 on the season and 6-0 in conference play, have just one day off before the annual Raider Challenge on Oct. 1 and 2.  The Raiders first match will begin at noon and they will face former conference foe Kellogg Community College.