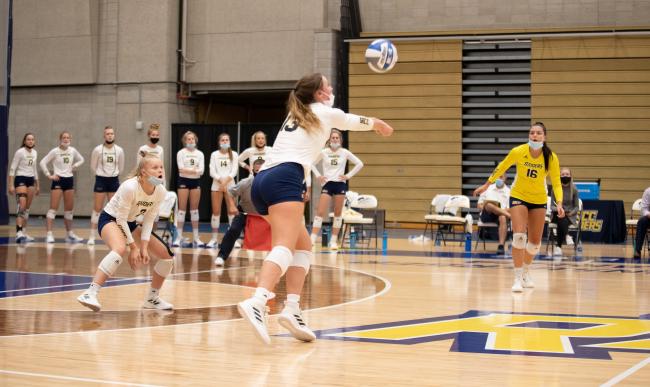 Terra State, from Fremont, Ohio, came into the match on a 25-match winning streak, and hadn't dropped a set since Aug. 28 when the Raiders won one in the Owens Tournament. The Titans dropped to 26-3 on the season after the loss.

Coach Chip Will was impressed with the performance and growth of this team this season.

"We've come a long way since losing to Terra State back in August," Will said. "Our lineup is a lot more solid than it was back then and I'm excited to see where we will be a month from now, because we haven't reached our full potential yet."

Every GRCC player who stepped on the court hit positive for the match and, as a team, the Raiders hit an impressive .346 with 39 kills and just 11 errors. Annie Holesinger led all attackers with 12 kills.

Holesinger ripped off 16 kills against the Macomb, with Audrey Torres adding 10 kills, Kylie Oberlin with seven, and Eliza Thelen with a collegiate high five kills.