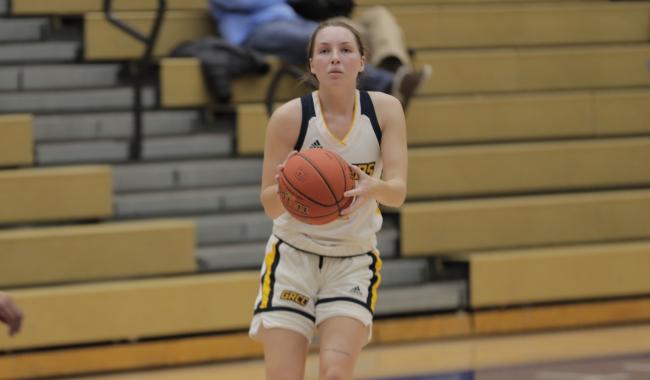 Dec. 8, 2022, GRAND RAPIDS, Mich. – The Grand Rapids Community College men's and women's basketball teams picked up two wins against Hope College junior varsity on Thursday, with the women outlasting the Dutch 71-69 in double overtime and the men dominating to stay unbeaten with a 90-66 victory.

The women's team played from behind nearly the entire night, trailing by as many as 15 points in the game, but surged back with big play after big play down the stretch in the fourth quarter.

Sophomore guard Alyssa Katerberg hit a three-pointer with 1:48 left in regulation to tie the game. On the next possession she put the team up for the first time since early in the first quarter with a free throw to make it 55-54. Emersyn Koepke made it a two-point game, but Hope forced overtime with a bucket with 27 seconds to go.

In the first overtime, with the team down by two points, Marlene Bussler drove through multiple Hope players to sink a layup with 12 seconds left. The GRCC defense didn't allow a shot, forcing the teams to a second overtime.

Sally Merrill scored the final go-ahead bucket with 27 seconds left in the game and then held on to her career-high 21st rebound just as the final buzzer sounded after a missed Hope three-pointer.

Grace Lodes recorded a double-double with 13 points and 18 rebounds while adding a career-best six assists. Bussler finished with a team-high 22 points and Katerberg finished with 12 points.

The men's team cruised to its ninth straight win to start the season, forcing 16 turnovers while only having eight giveaways.

Freshman Bashir Neely was the game's leading scorer, finishing 12-of-24 from the floor for 29 points.  He also had a team-high eight assists and four steals.

Both teams return to the Gerald R. Ford Fieldhouse on Dec. 10 for a matchup against former Western Conference rival Lake Michigan College.  The women will tip-off first at 1 p.m.