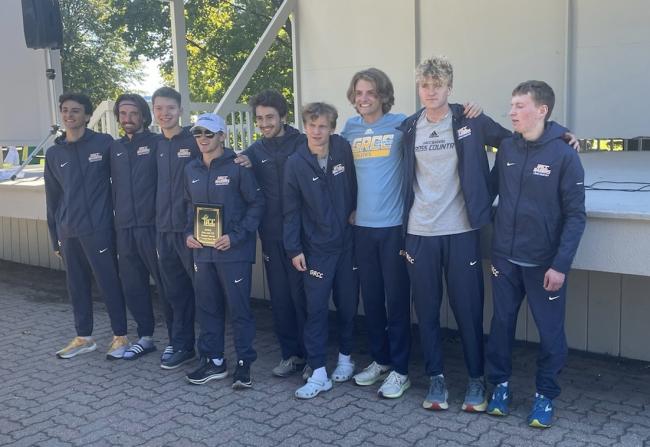 GRCC's women's team, ranked No. 6 in the first U.S. Track and Field and Cross Country Coaches Association poll of the season, dominated the field of 13 teams, beating second place Southwestern Michigan College by 22 points; 49 to 71.

All-American runners Kaylee Scott and Audrey Meyering along with Rose Meyer finished second, fourth and sixth in the 5-kilometer race with times of 20:07, 20:11 and 20:32. The field consisted of 80 runners from the Michigan Community College Athletic Association.

Six of GRCC’s seven runners all ran personal bests for the season, including freshman Zoe Zawacki, who ran 7:37 faster than her first collegiate race.

“Kaylee and Audrey ran a strong race together,” coach Sharon Becker said. “I’m thrilled that they were able to help each other power through almost every step together. Audrey was a little dissatisfied that she was unable to hold off the third-place finisher, who passed her at the very end. But moments like that are great ones to learn from. Audrey will be working on her finish kick the next few practices.

Becker said she is proud of all of the student-athletes on her team.

“Each of them ran an excellent race with their efforts for their last mile of the race continuing to be strong,” she said. “I saw every one of the women Raiders pass competitors or keep their pace so that they were giving every effort to reach the finish line as fast they could possibly go. I’m proud of our team and their commitment to each other and to helping each other. Today was a beautiful day and it was very fun to coach the team.”

The men's title came down to the untraditional tiebreaker rule. With GRCC and St. Clair County Community College tied at 59, the race was determined by how each team's sixth-best runner did. By a mere eight seconds, GRCC's Lucas Schneider defeated St. Clair's sixth runner 28:36 to 28:44.

“Wild race today!” men’s coach Rob Hyde said. “We had some season-bests today and some not season bests.  What that created was our pack was closer together than normal.  Looking back, that was a blessing in disguise.”

GRCC is next scheduled to compete in the Muskegon Community College Invitational on Oct. 15.