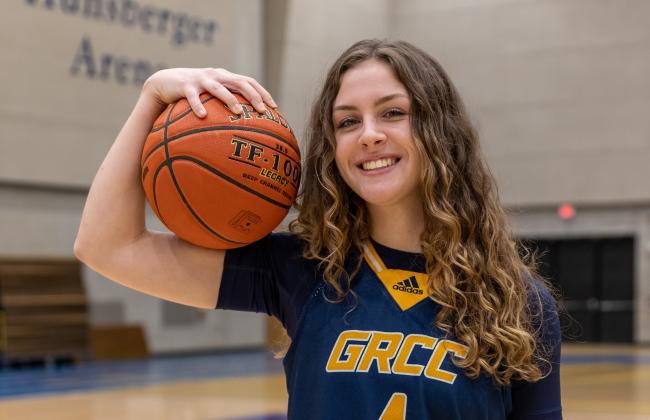 Jan. 10, 2023, GRAND RAPIDS, Mich. -- Grace Lodes started playing basketball in kindergarten at the tender age of 5, but, she said, it was love at first dribble.

“Yes, I loved it from the second I started playing,” she recalled recently. “I wanted to learn and know more about the game every single day, and I did.”

That love for the game continues this season at Grand Rapids Community College where she has become one of the team’s most dependable players.

A 6’2” power forward and center, Lodes is averaging 32 minutes per game for the Raiders and making the most of her time on the floor. Through the first eight games of the season, she was averaging a double-double: 13.0 points per game and 12.1 rebounds per game.

“I have some guard-like qualities – quick feet and hands and some speed – that sometimes surprises my opponents,” she said. “That, plus my height, allows me to work on different aspects of my game every game.”

Seventh-year GRCC coach David Glazier agreed. But he said during the recruiting process, something Lodes said to him struck him as powerfully as her on-the-court abilities.

“We were talking about her playing time during her senior year, and her comment was that she believed in her coach's vision, she knew what her role was, and she just wanted to make the best of her opportunity when her number was called,” he recalled. “That comment provided such a level of insight into where she was in her emotional growth and how she would carry herself at GRCC.”

Now that she’s at GRCC, Glazier added, what he saw in Lodes as a high school senior continues.

“She is always looking to improve and always wanting to know more about other’s opinions both in basketball and in life,” he said.

He added with a big laugh: “She is also very willing to tell me when she thinks I am wrong.”

Opposing coaches haven’t seen much wrong with Lodes’ work on the hardwood.

Last year she was named Defensive Player of the Year by the Michigan Community College Athletic Association Western Conference and was both an all-conference and all-region honoree. She also led the nation last season in blocked shots as GRCC finished with a 20-11 record, reaching the championship game of the NJCAA Great Lakes A District tournament.

Lodes, of Comstock Park, said that as a high school senior at West Catholic considering college options, she was drawn to what her future might look like apart from basketball.

“I was looking for opportunities such as starting my own business and getting my real estate license,” she said. “I was still focused on playing basketball in college, but in terms of my career, I wanted to go somewhere that would put me in the best position of where I wanted to be in the next couple years.”

She found that at GRCC, she said. And the fact that GRCC was the best option financially was an added bonus.

The recruiting process was also a highlight.

“Coach Glazier made me feel wanted, welcomed and appreciated,” she said.

That has carried over to her career as a Raider.

“Coach Glazier’s coaching style is constructive and caring,” she said. “He is always looking a step ahead, at what we as players sometimes can’t see, and he looks out for our best interests.”

Lodes is studying business and business management at GRCC and on track to earn her associate degree this spring. She said her classroom experience wasn’t smooth sailing at first but now she’s figured things out, including better time management, and her sophomore year has gone much better in terms of learning new material, communicating well with her professors and, she added, “getting assignments done well before their due date.”

After graduation, she hopes to earn a bachelor’s degree in business and also is aiming to get her real estate license by the end of 2023.

“My end goal is to be in the real estate field while also getting into starting my own business within the next 3-5 years after GRCC,” she said with a smile.

As her opponents would tell you, don’t bet against her.