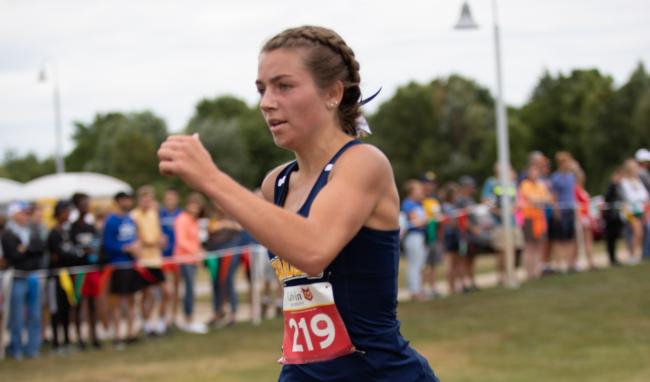 Scott, a freshman from Grandville, is the second GRCC runner to be saluted this week by the MCCAA, and the fourth GRCC student-athlete to earn honors already this season.

Scott finished a solid 40th place among runners from NCAA D2, GLIAC & NAIA schools at Saturday’s Calvin Knight Invitational, with a final 6K time of 24:32, a 6:35-per-mile pace. GRCC was the only community college team competing in the event.

"I am so pleased that Kaylee has been chosen as the MCCAA Runner of the Week," coach Sharon Becker said. "She is a great teammate and we are grateful for her contributions to help everyone in our team become better. Kaylee and Audrey Meyering having been working together in practices the past few weeks. Both women are hard workers and want to do all they can do be the best they can be. Before the season started I was concerned that Audrey would not have a teammate to help her and challenge her in key workouts (a teammate as fast as she runs). From the first day, Kaylee showed not only that she followed the training plan during the summer off-season but that she is a very determined and talented runner."

Audrey Meyering was named an All-American after last season, when the women's team finished fourth in the nation.

The Raiders are next scheduled to compete in the Knight-Raider Invite that Calvin College and GRCC will both co-host, Saturday Sept. 18. Competition is set to begin at 10 a.m. for the women and 10:45 a.m. for the men.

The MCCAA on Tuesday named GRCC’s Coleman Clark Men’s Cross Country Runner of the Week after he opened up the season with an 8K time of 26:48 at the Calvin meet, good for 57th place overall out of 184 runners.

It’s the third week in a row the MCCAA has honored a GRCC student-athlete. Volleyball team members Annie Holesinger and Ola Nowak were each named Western Conference Player of the Week.