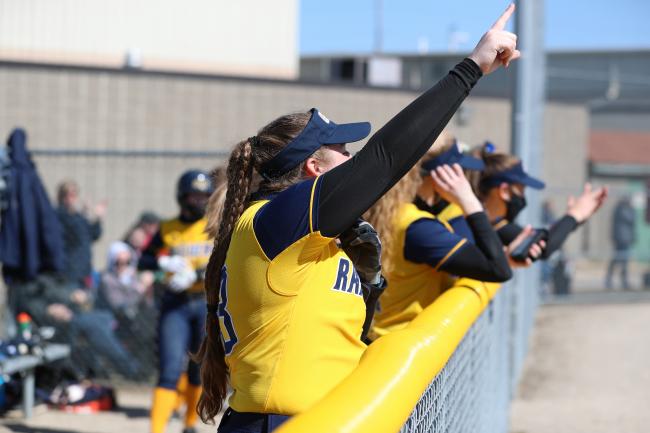 The softball team showed some muscle in its first game of a doubleheader, beating Ancilla College 14-5, before dropping the second game, 6-2.

The baseball team won the opener 3-1 – the team’s narrowest margin of victory this season – then followed with an 8-2 win in the nightcap.

Aaron West supplied most of the offense, driving in a run in the first with a double, then launching a home run in the third.

Drew Murphy pitched GRCC to victory, going five and a third innings, allowing five hits and one run while striking out four.  Bradley Dunn threw one and two-thirds innings in relief, recorded the last five outs to earn the save.

Five runs in the second inning turned out to be all GRCC needed in the second game. Payton Young singled, and Jake Paganelli homered.

Caleb Englesman led the GRCC to victory on the hill. The right-hander surrendered two runs on four hits over six innings, striking out eight. Dalton Vander Ark threw one inning in relief.

Bryson Adare took the loss for Mid Michigan, going four and a third innings, allowing one run on two hits and striking out two.

The team is unbeaten since dropping the opener to Aquinas College, improving to 8-2 – and winning four games in two days. The team faces Aquinas again on Tuesday at Belknap Park.

The softball team played on the road in Anderson, Ind. after Friday’s games against Mid Michigan were postponed.

Pitcher Alexa Abrahamson had three hits – including a home run – and earned the win. Alexis Nguyen had four hits on the day, and also homered.

Haley Van Huis with 2 hits and 3 runs scored for the day, and Krin Beech excelled defensively.

The Raiders are 2-6 on the season, and are next in action on Tuesday with a doubleheader at home against Kalamazoo Valley Community College.