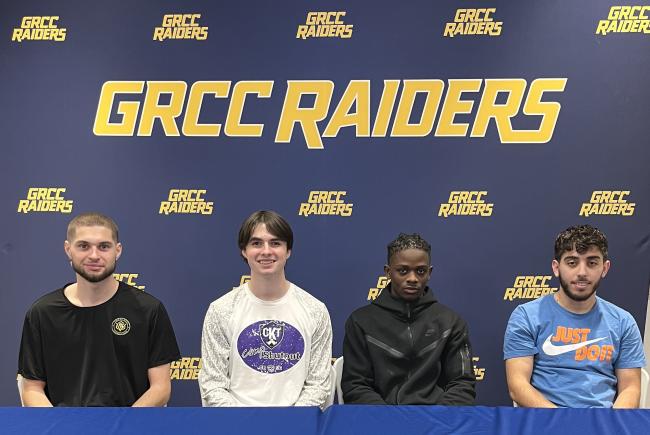 "We have a group of great individuals on and off the field," coach Damiekco Smith. "Glad to be able to sign some hometown heroes."

The GRCC Athletic Department has added soccer in response to a growing interest in the sport internationally and an increasing number of requests from potential student-athletes.

The first four players to commit to the team have experience playing at the high school level.

Ian Gunderson played for Northview High School and graduated in 2022. He is a center back and received an All-District award his junior and senior years, along with All-Conference, All-Region, and Honorable Mention All-State his senior year.

Gunderson was also a captain and received an award his senior year from his team, showing it voted for him as its most prominent leader and support on and off the field. He played club soccer on a SCOR National League team for three years.

Brett Miller also attended Northview High School, where he was a three-year varsity player. Brett produced 11 clean sheets – when a team concedes zero goals in a match -- and only allowed 0.6 goals per game.

His 93 percent save average was rewarded by making first team All-State in Division II his senior year as a goalkeeper. He was also a part of the All-Conference and All-Region teams.

Hani Alturkmani played his high school soccer at Wellspring Prep Academy, where he was named to the All-Conference team during his freshman and senior years. He is a striker with an innate ability to find the back of the net. He also played his travel soccer with the Revolution.

Yosia Mukanda is a graduate of Potter's House, where his team won the school's first-ever state championship in 2021. His dream has always been to play collegiate soccer and is happy GRCC is where his dream will come true.

Women's soccer was also introduced this past year, with Lizzie Hornack guiding the team.

There are still opportunities for students looking to be a part of both teams.  Recruiting questionnaires are available here for the women's team and here for the men's team.